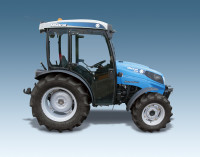 The four-model Landini Mistral compact tractor line-up being exhibited on stand S 42 at the Saltex event has been treated to a technical and cosmetic make-over. There are new engines, a revised control layout and fresh styling.

The ARGO Tractors operation in Italy is a major producer of compact tractors, building around 3000 a year at the San Martino in Rio factory in northern Italy.

To ensure complete quality control, transmissions, hydraulics and axles for the Mistral tractors are all machined and assembled in-house rather than bought in 'off the shelf' from component suppliers.

"Landini compacts have an excellent track-record for performance and reliability," emphasises Eamon Howden of distributor AgriArgo UK. "It's a proven product and one that works well in the hands of operators in the amenity groundscare sector."

The latest versions of the Mistral sport new three- and four-cylinder Yanmar engines that comply with the latest exhaust emissions rules. Power outputs are unchanged at 35hp (three-cylinder), 44hp, 49hp and 54hp (all four-cylinder) but the engines are reckoned to be more efficient as well as 'cleaner'.

Drivers are more likely to appreciate the redesigned 'cockpit' area on the tractors, where new control designs in a fresh layout help make life easier and more comfortable for the operator.

The changes are highlighted by fresh bonnet styling that gives the tractors a sleeker appearance.

All four models in the range can have either a 12x12 or 16x16 shuttle gearbox plus two-speed rear power take-off, which provides one setting for 'power' and one for 'economy'.

"With implements that don't need a lot of power, the 'economy' pto gearing allows the engine to be run at a lower speed to reduce both noise output and fuel consumption," explains Eamon Howden. "A third setting relates the speed of the pto to the forward speed of the tractor, which can be useful for a number of specialist turf maintenance implements."

Like all Landini tractors, the Mistral T3 range is backed by a nationwide network of sales, parts and service dealers.