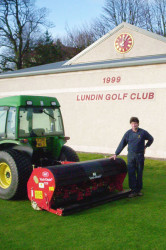 High standards are important for Lundin Golf Club. Located in Fife, its 18-hole course has been regularly selected as a final qualifying course for the Open Championship when played at St Andrews.

Course maintenance is the responsibility of Head Greenkeeper Willy Swan and his team of six. He joined 17 years ago, shortly after the Club had bought one of its most important turf care machines, a 105-145 Verti-Drain deep aerator from Charterhouse Turf Machinery. While still giving faithful service, the Club recently added a second Verti-Drain, the latest 7120 model, a high-speed machine.

"We used to call in a contractor with an additional Verti-Drain, but we decided it was more cost-effective for us to buy a second machine," says Willy. "It has basically taken over from our older unit, and its productivity is incredible owing to its high working speed. An inexperienced operator was recently able to aerate all 18 greens in just two days, whereas the old machine could take up to five."

At 2m (78in) wide, the 7120 Verti-Drain gives super-fast performance with great accuracy and rugged build quality to satisfy the most demanding of users. Powered by tractors of 45hp and above, it can be used all-year-round to keep all sports turf surfaces free-draining and in peak condition, by altering the tines and their spacings.

At Lundin Links, the 7120 is used on greens, tees and fairways, as well as surrounds and, according to Willy Swan, "is almost in constant use. On the fairways we may do up to six passes with the machine. It is particularly effective for intensive aeration, and we use it most often with the mini tines." The 8mm tines are configured in blocks of six per head, with a total of 60 tines on the club's machine. "The operation is very effective. On the greens, we mainly use 8mm solid tines, and sometimes 12mm diameter tines.

"As well as the performance, we are also impressed by the 7120's excellent balance fitted to our John Deere 4600 tractor. Heavier aerating attachments might cause toppling, but we find no difficulties with the 7120, even when going over undulations."

Another plus-point is that the 7120 features direct gearbox drive to all cranks powering the tine assembly. This configuration does away with drive belts and avoids any risk of slippage, giving perfectly spaced operation at all times.

"Because we use the Verti-Drain regularly, the turf on the course drains very well, and we have no thatch problems at all. In fact, the 7120 has proved so effective that I hope to be able to invest in a second machine soon. This would fulfil all our aeration needs."

The Club's original 105-145 is still performing well. Although 18 years old, the only parts that have needed replacement have been the bearings and one depth adjuster. "We have a lot of 'carry' from the tees to the fairways, and the 105-145 is used for areas suffering intensive wear caused by the traffic of golfers and machinery."

"However, the high-speed 7120 represents a major technological advance," says Philip Threadgold, Managing Director of Charterhouse Turf Machinery. "It achieves more than twice the productivity of the original Verti-Drain. Proof of this is the astonishingly fast aeration that the Lundin course staff are able to carry out on the greens, maximising operational efficiency."