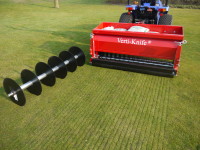 The City of Paris decided to purchase the new Verti-Knife 1600 of Redexim for the regular aeration of the turf of the 16th century garden Jardin des Tuileries, famous for its voluptuous sculptures, and the small grassed parks on the side of the Champs-Élysées.

The Verti-Knife runs round discs of different diameters and configurations through the soil, up to a depth of 150 mm. Hard obstacles in the soil, like stones, will not damage the discs, as they will run over them. The Verti-Knife can be run at speeds of 6-7km per hour, enabling the grounds staff to aerate all the grass areas within a few hours, without leaving damage to the turf surface.