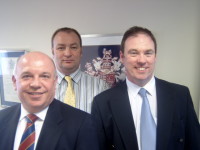 DOUGLAS HART, who takes on Scotland, studied at agricultural college before later becoming a greenkeeper at Gullane, where he worked for four years. Having gained diplomas in both agriculture and turf management, Douglas spent 18 years in New Zealand running his own sports ground contracting business, involved with cricket wicket, oval and race-course construction. Now back home in Scotland, he has updated his knowledge on the latest products and turf management practices and is keen to pass this information on to customers. "I'm looking forward to building on Vitax's good name in Scotland and developing new business," he says.

STEWART JEFFS, responsible for South East England, also started his career in agriculture but swiftly moved into Amenity Turf and brings over 25yrs experience to the post. His aim is to support distributors and ensure that customers are familiar with the Vitax product range. "Due to environmental issues which everyone's aware of the business has become a lot more technical and we're taking a much more technical approach," he says. "I'm looking forward to encouraging customers to utilise products to the maximum."

JOE CRAWLEY, returns to Vitax after nearly three years absence to accept a position with greater responsibility and a more specialised, scientific brief. "My area has increased to include not only the South West of England but also Northern Ireland," he says. Crawley, whose career began in greenkeeping and groundsmanship with Basingstoke Borough Council has always wanted to specialise in turf care, and is keen to grasp this opportunity.

Daniel Wilkinson, Commercial Manager for Vitax says that company policy demands a high level of agronomic knowledge from its technical advisers and ensures that they work solely with turf related issues. "In this way we believe we can offer the best possible service to our clients and distributors in an industry that has become more scientifically based," he says. "I'm sure that Douglas, Stewart and Joe are the right people to pursue this policy and thus take the company forward."