Seven months on from the purchase of a second Wiedenmann deep aerator, the greenkeeping staff at Woodbridge Golf Club in Bromeswell Heath says it has proved a real money-saving move.

Head greenkeeper at the Suffolk course, Justin Hunt, believes the new Terra Spike GXi8 HD has made a remarkable impact to the efficiency of his team's efforts, making a considerably bigger contribution to their 27-hole site than originally anticipated.

"We bought our first Wiedenmann, the XP 160 when it was newly launched so that makes it about ten years old and it is still as dependable and precise as the day it arrived. It works very capably down to about 40 cm. We'd been using that in tandem with a Ryan GA-30 which did hollow tining work to a depth of about 9 cm. When we eventually needed to retire the shallow machine, we went back to the drawing board to consider everything on the market," he said.

"Ours is a tight course, with some old style greens that have a lot of bunkering and mounding around them so it was a toss up between the Terra Spike GXi8 at 1.80m wide or its sister machine, the GXi6 more compact at 1.40m wide. 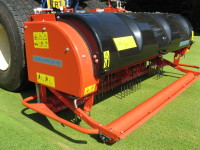 "With the GA-30 we'd been used to a machine which was quite small, very manoeuvrable but still quite fast. The GXi8 delivered on all those but just offered us so much more in terms of versatility. I can alter depth; adjust the degree of heave; meaning I can accurately target specific problem areas within the soil profile."

The team at Woodbridge has used the GXi8 at least monthly on greens and every two months on tees, missing out only in January because of 4" of snow cover.

"So far we've used the 12 mm and 8 mm tines and twice we've used the multi tine heads loaded with fine 5 mm tines. We always use a tight square hole pattern on the greens and longer pattern on the tees," continued Justin Hunt. "We will now hollow tine our tees with the GXi8 in June and then again in August." 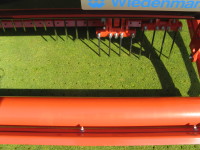 Woodbridge GC with its classic heathland setting boasts two courses designed in 1893 by the famous Scottish professional Davie Grant and subsequently updated by James Braid. The 18 hole, Heath Course features well separated fairways fringed with heather, gorse, oak and pine while the full-length, nine hole Forest course is a real gem. Well known for their sandy, free draining sub soil the courses usually remain playable even after the heaviest rain and are maintained to the highest standards throughout the year.

Having had the GXi8 across winter and spring, Justin Hunt reckons it has been money well spent. The versatility of the new Terra Spike GXi8 working in tandem with the XP 160 has meant some of his six person team at Woodbridge now have freed up valuable time for non-aerating duties.

"The whole job is much, much faster and course closure is down to an absolute minimum. The last two occasions when we have used the needle tines we haven't closed the course at all. If we get out early in the morning we can stay ahead of play. And it's not just fast, it's neat, it leaves a very precise finish all the time; in fact the operators have likened it to a sewing machine it's so smooth!"

The Wiedenmann Terra Spike GXi8 fits to tractors 30 hp and above and retails from £25,750 ex VAT (RRP)