Wiedenmann's new MCS Favorit 650 collector has a distinctive look and an equally distinctive range of features that set it apart. 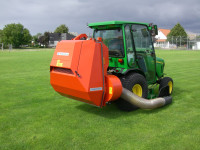 Designed to fit on to all compact to mid hp tractors (20-30hp) with a 3 point linkage, the MCS Favorit 650 delivers productivity and efficiency while adhering to the latest noise and safety legislation.

The unique Wiedenmann 540 rpm "whisper" suction turbine has a six steel blade vane set up which is central to the collector's capability. The Favorit 650 also has an innovatively routed airflow system where spent air is discharged through a low level air vent, allowing the ground to absorb almost all of its noise. Combined, these two developments make the Favorit 650 operate more quietly than any tractor. The Favorit 650 therefore adds "no noise" and can work without restriction in sensitive areas such as hospitals, schools and residential sites.

Keen to lead the market in advancing such technology,
Wiedenmann Gmbh has invested in a "noise testing" lab at their German HQ in Rammingen, an acoustics suite where the whisper turbine was developed and refined over a period of months. Such low emissions are a significant benefit to the professional user, while still delivering a high powered performance.

The Favorit 650's steel modern frame is totally self supporting, allowing the operator to empty the hopper at a range of heights. 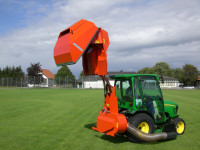 The hopper integrated lifting arm has a sleek, aesthetically-pleasing look, with an array of impressive attributes. The deep steel bin is noticeably wider than other compact collectors giving it an edge when it comes to productivity. Impressively, the container can be discharged at heights of up to 1.8m allowing it to work in tandem with other equipment and carry out a host of maintenance and collecting duties. Another major benefit is its ability to collect wet material a distinct advantage when weather is changeable and unpredictable.

New to the collector is a large outlet grill which prevents blockages and this has a maintenance flap which makes for easy cleaning. There is also a rear door which allows further access and trouble free maintenance. All three versions come with collecting chute, hose and linkage pins as standard.

Among the options are support wheels which stabilise the collector when unloading at high height and over undulating ground. There is also a 5m wander hose, a parking stand, road lighting kit and electric fill indicator (12v). Additionally Wiedenmann supply different side boots to most tractor decks.