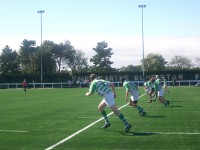 When the Newcastle Falcons carried out their decisive victory of 39-0 against Galway's Connacht in the European Cup in December it was testament to their outstanding training facilities.

The training ground is just ten minutes from the main stadium and has been totally transformed in the last year by SIS (Support In Sport) with a new artificial pitch.

Used by both professionals and amateurs - Gosforth Rugby Club - the training ground was built on an existing soccer pitch which was removed, a new drainage system installed (at five metre centres) and a stone base added before laser levelling.

After a Schmitz shock pad was added, to meet IRB requirements, a synthetic carpet manufactured in Cumbria - the SIS Rugger - was installed.

Developed in conjunction with Tencate, this carpet has unique features of performance and softness. It has long-pile monofilaments which are non-abrasive and can be sand and rubber particle filled.

Installed by SIS staff at Newcastle using the latest high-spec equipment the infilling was carried out using a Sandmatic machine, perfected by SIS for a superb finish. The whole project took 10 weeks.

The new synthetic pitch is used daily by both Newcastle Falcons, Gosforth Rugby Club and other amateurs and has been a winning formula for all.

SIS chief executive George Mullan said: "Training is vitally important to a professional rugby club and we are delighted to have been instrumental in Newcastle Falcons' continued success on the rugby field.

"I was at the stadium on the Sunday they won with a group of executives from other rugby clubs and it was a delight to see Falcons performing so well.

"From the comments I have had it seems the training facilities provided by SIS have had some influence on the team."

"Newcastle Falcons first team squad train on the pitch and the players are very happy with the surface," he said.

"Two clubs have written to me to express their satisfaction with the surface. SIS provided a first class service in terms of the construction and working with the club."