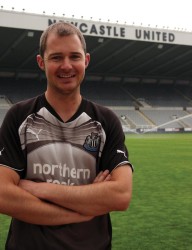 Newcastle United has eight groundstaff. The decision to add undersoil heating on the new training pitch was brought about because of the extremely bad weather experienced between November 2010 and the end of January 2011. Andy Tulley is responsible for the pitch at St James' Park and Mick Curran is responsible for the training pitches and Academy. Mick comments, "In 25 years I have never known the snow and cold to be so bad and so persistent. At one stage we had nearly 12 foot of snow cleared at the side of the training pitches."

Newcastle United were the first football club to install a fibrelastic pitch in the UK, closely followed by Bristol City. The decision was made following a review of data derived from a thorough product testing programme carried out by the Sports Turf Research Institute (STRI) at Bingley, West Yorkshire. Newcastle's primary concern has always been the wellbeing of its players, of which the playing surface has arguably the biggest impact. Fibrelastic was developed to offer a softer playing surface for players along with all other characteristics of reinforced sand dominant rootzone pitches.

As well as being popular with players, Fibrelastic is also groundsman friendly. It has the drainage characteristics of a sand dominant pitch, with the 'give' of a soil pitch, yet the fibres provide an intricate mesh in which to support the grass roots. It is also easy to repair post match. Newcastle use a team of seven men, following a block pattern putting back any scars or divot which may have occurred after a match. On most occasions the team will also use two rotary mowers to clear any remaining debris.

After this, the pitch will be watered and the SGL lighting rigs will be brought in. On most days stadium grow lights will be used for 3 to 4 hours because much of the pitch does not get much natural light. 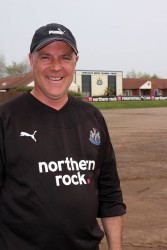 The maintenance regime prior to a match involves a cut on the day of the game during the growing season. During the optimal growing season, between April and June, the team will cut three times per week. The optimal height for the grass is 25mm. For the match finish, two 26" Matador cylinder mowers are used. With regards to irrigation, not much is usually required in winter; however Fibrelastic, along with other sand dominant rootzone pitches, does play better when the surface is wet.

That is why, on match days, the pitch is always irrigated heavily. The pitch is aerated with a Toro Pro Core pedestrian solid tine aerator roughly once a month, fixtures permitting, fitted with 8mm tines at 100mm depth.

The maintenance regime at the training pitches is slightly different because they are used six or seven days a week from July to the end of the season, for roughly three hours a day. The current fibrelastic pitches are reserved for the first team. The reserves play on the soil pitches. The pitches are verti-drained once a month with half inch tines at three inch centres.

The training pitches are cut with a rotary mower after the Monday and Tuesday sessions, followed by an additional cut with a 36 inch cylinder mower once a week in season. In early and late season, Mick uses a five unit Jacobson LF 3800 cylinder mower.

The addition of a third Fibrelastic pitch will mean that Mick can adopt a two year plan with regard to renovation - every other year a pitch will be fraise mown. In the year that a pitch is not being fraise mown, a full re-cultivation takes place. At the end of the season the pitch is stripped with the Imants Field Topmaker and re-cultivated with a Kuhn power harrow. An amount of fibrelastic rootzone will then be added over the 17,500m2. It is ameliorated using the power harrow and then consolidated by 'wheeling in' before it is levelled with a BLEC rotary rake prior to overseeding using 45 bags of R14 ESP - a disease resistant rye cultivar. The area is fertilised with a 10:15:10 fertiliser mix to help generate ideal soil conditions for germination. Whilst the grass is growing, it is fed weekly for 3-4 weeks with a 12:0:9 NPK mix. The pitch is watered daily - Mick adopts a 'little but often' approach.

First cut is usually after three weeks at second tiller stage. For the following three weeks, only a rotary mower, set at 30mm, is used, while coverage is still sparse. After four weeks a 36" Ransomes Mastif cylinder mower is used. Fertiliser is cut back to once every 3 weeks. Once the training pitches are used in earnest, Mick moves the position of the pitches by 24 feet to ensure grass depletion does not occur in the usual trouble spots of the goalmouths and centre.

At St James' Park, the pitch is re-cultivated every year for optimal conditions and to add new gases into the soil. Because the stadium is 271ft high on on two sides, and the other two sides are 190ft, the stadium truly has its own micro-climate, with light and airflow being the principal aspects affected. Between October and February, the pitch gets only 5% natural light. 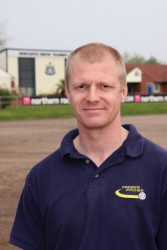 Premier Pitches has been Newcastle's pitch contractors for the past four seasons and was involved in the selection of the fibrelastic pitch. General Manager, Jonathan Woolfall, comments, "We were astonished to find that the drop tests for fibrelastic were the same, whether their was grass coverage or not; no other 'natural' turf playing surface can offer that. In areas where there is sparse grass coverage, the soil tends to suffer from compaction, baking and water-logging. A fibrelastic surface is unaffected so, even if the pitch looks unsightly, the play is exactly the same and the ball even runs true. Of course, in these days of hi-def and 3D TV coverage, a pitch's appearance can be subject to a lot of media focus."

Of course, the pitch at St James' Park and the training pitches at Longbenton underwent their harshest test yet over the winter. The undersoil heating had to remain on constantly at the stadium between late November and February and, even then, the soil temperature never rose above 5OC. The temperature within the stadium dropped to minus 14OC on a number of occasions and there were still ice crystals on the leaf. The pitch had to have the snow scraped off regularly which obviously takes its toll on grass coverage. Prior to one match, stewards and cleaners were called in early to assist the groundstaff. Fifty staff were scraping the pitch at one stage. Andy recalls, "I had to buy every ice scraper I could lay my hands on. We now have 150 instead of our usual complement of 50."

Despite these challenging conditions, not one fixture was lost and not one complaint was made by the players or management, which is testament to the hard work of Newcastle's grounds team and to all those involved in taking the decision to invest in the fibrelastic rootzone system.