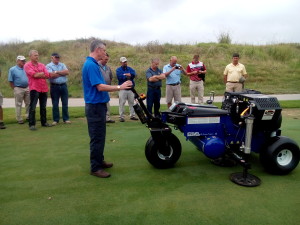 Assisted by Campeys newly appointed South African dealer Nanquip, based at Mossel Bay in the Eastern Cape, the Air 2G2 has been showcased at a number of demonstrations, the first of which was at Fancourt Links, George, one of South Africa's premier golf courses.

Campey Turf Care Systems, along with Nanquip Product Specialist Marcel Sonnekus, used the Air2G2 Inject on the turf nursery, where they were able to aerate the ground deeper than had ever been done before. The visitors were able to see movement beneath the green as the air travelled through the profile.

David Harrison, Export Sales Manager at Campey Turf Care Systems who has more than 30 years experience in the grounds care industry, was on hand to assist with the first series of demonstrations.

He explains how the demonstration was carried out and the benefits it had on the greens at the various locations.

He said: "On all the demonstrations we worked with 9" or 12" probes and we were able to go far deeper than the greens had ever been aerated before in every case".

"The benefits of relieving the compaction at lower levels are improved water percolation and helping to promote a deeper rooted grass sward. Pushing air through the root-zone from below improves gaseous exchange and has also been seen to combat surface algae.

"Over the following days, we travelled to a number of golf courses in and around Cape Town, repeating the demonstration programme and exposing the machine to greenkeepers and contractors, and in many cases, letting them use the machine themselves" said David 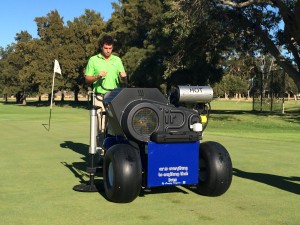 "Apart from the obvious agronomic benefits of introducing air directly into the root-zone, it is possible to aerate the greens when they need it most, and not when it fits into a window in the golfing calendar." explained David.

"This is because there is little or no disturbance or disruption to play, it can basically be done at any time, and as often as needed.

"Following this first round of demonstrations, Nanquip took bookings for several return visits to golf courses around Cape Town, to contract for work on problem greens," confirmed David.

For more information on the Air2G2 Inject and all the other products in the Campey Turf Care range please go to www.campeyturfcare.com