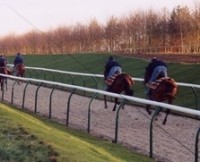 Lindum's revolutionary Grassfelt, the soil less turf grown into a special reinforced felt which was launched at Saltex, has been used for the first time in an anti erosion capacity.

Over 2,000 sq. metres left the specialist grower's turf farm in Thorganby near York, at the end of Nov. 04., bound for Newmarket, arguably the largest equestrian training centre in the world.

"We've 78 trainers working with up to 2,500 horses at the height of the training season," says Peter Amos, MD of The Jockey Club Estates Ltd. "The Jockey Club owns 4,500 acres around Newmarket of which 2,800 acres are training grounds. We've got two grade one race tracks and 24 artificially surfaced training tracks." One of these training gallops was not being utilised to full capacity.

"It was not very kind to the horses," explains John Taylor who has been at Newmarket for 35 years and Gallops Manager since 1989. "It went into a dip, which was far too blunt and then straight up a steep hill and over the brow. The yearlings in particular were not happy using it."

Work began on Oct. 1st. to modify the existing gallop, cutting through the brow of the hill and using the 18,000 cubic meters of removed soil, to fill in the dip. According to Peter Amos, this is the first time he's had to engineer the track line. "We usually use the existing topography," he confides, "but this track did not function particularly well and we wanted to create a gallop with much better riding characteristics."

As construction was due to finish in November, it was too late to seed the exposed sides of the new cutting, but even in summer, seeding or conventional turfing would have put the project at risk.

"There was always the worry that a flash flood, even in June or July, could wash the whole lot away," continues John Taylor. "We decided to use Grassfelt because once in place it was safe to use the new track. It could cope with the steep inclines and was stable enough to remain put during periods of high rainfall."

The new gallop opened on Dec. 2nd., and according to Taylor, it's very popular. "There are literally hundreds of horses using it per day," he confirms.

For further information on Lindum's new Grassfelt, contact the company on Tel: 01904 448675, or visit their website at www.turf.co.uk