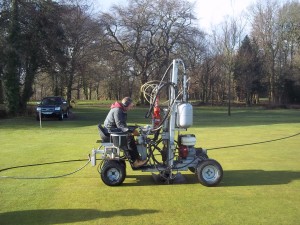 The course at Newport Golf Club in South Wales is fairly flat and sits about three hundred feet above sea level. The site is an ancient oak and birch woodland and the high quality course was first laid out over a hundred years ago. In winter months golfers enjoy a backdrop of snow capped mountains.

It is in the winter that four of the wettest greens are most likely to be put out of use and Terrain Aeration were called in to treat these in a day-long trial. The greens are believed to be of the original profile with clay cup construction and despite the resulting impeded drainage they looked good with a deep green colour and very dense sward; a credit to the greenkeeper's maintenance regime.

Closer inspection though revealed evidence of plugging, where the golf balls have failed to bounce and have buried themselves in the wet and soft turf. This softness is despite regular pencil tining and the principal reason for calling in Terrain Aeration was to disperse the retained water insert.

Treatment applied using the Terralift machine was on normal two metre spacing to a depth of one metre. Dense red clay was encountered at about 700mm which was penetrated after a short period of hammering and dried, milled seaweed was injected to maintain aeration. It was found the surfaces of the four greens were very tender so only an eight bar pressure was used, producing a ripple of movement but leaving the greens undamaged. The probe holes were then backfilled to within 75mm of the top, using Lytag aggregate. A plug of the club's preferred top dressing was then added to each hole.

All that remained to be done was a quick clean up with a leaf blower to remove any debris and a pass with the greens iron. The greens were back in play, with the whole process taking just two hours per green, and before they were even finished there was a noticeable improvement to the firmness of each green.

With the problem solved Terrain Aeration learned they would be returning to Newport in the autumn to treat the rest of the greens on the course as well as doing some one metre depth soil coring to establish the actual profile under the greens.