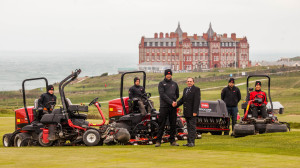 Since Dan Kendle, head greenkeeper at Newquay Golf Club, arrived at the links course overlooking Fistral beach in Cornwall in 2014, he has been steadily adding Toro to its shed.

From the first Toro, the revolutionary Greensmaster 3400 TriFlex to the most recent, a Groundsmaster 4300-D that arrived in the spring, the club now boasts a Toro fleet to "rival most others" says Dan. And the difference both Dan's and Toro's arrival has made at the club is most significant in the health and quality of the grass.

"When I arrived at Newquay Golf Club the turf was in a very sorry state," says Dan. "There was a lot of disease scarring on the greens and the sward was very weak. It's a hard-working course, open 365 days of the year and it needed a lot of improvement.

"Woodhall Spa, where I'd been for 15 years before heading back to Cornwall, uses solely Toro machines so I was well versed in their capabilities. Working with the management committee at Newquay we came up with a strategy that would allow us to get the best out of the course, acquiring machines through Devon Garden Machinery for the most pressing issues first when the budget could accommodate the investment."

It's a strategy that has worked; in less than three years the proof is clearly in the turf, the health and species composition of which has improved hugely, a fact supported by the members whose feedback is "really positive".

Particularly instrumental in that improvement, says Dan, is the formidable pedestrian aerator, the Toro ProCore 648. "One of the early arrivals, the ProCore is one of our most invaluable pieces of kit. With interchangeable tines, it will do anything and everything when it comes to aeration. We can micro-tine in the summer and you wouldn't even know it had been done and most importantly it doesn't disturb play. We're lucky to have really good drainage, but we use the ProCore monthly without fail to maintain the standards we are becoming known for."

The ProCore also proves its worth in the club's bi-annual maintenance weeks in March and October. Designed to help ease compaction and aid the turf's all-important free draining quality, these maintenance weeks see Dan and his greenkeeping team of four solid tine, overseed, fertilise and topdress the greens, aprons and surrounds to help 'repair' the course after the hard weather conditions of winter and the heavy footfall conditions of summer.

So what next for the 126-year-old, par 69, 6141-yard course? Dan tells us it's more of the same, with a real push to keep improving and elevating the course to be one of the best in the county joining fellow Cornish and Toro club Trevose in the top three.

And we have no doubt they will succeed; after all you don't have to be the hare to win the race!