A representative from the National Football League (NFL) has run the rule over the progress being made on Tottenham Hotspur's new stadium, which will host regular American football games 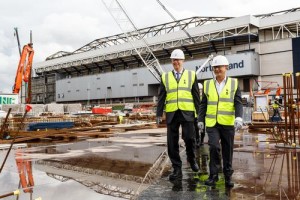 Executive vice-president international Mark Waller joined Tottenham chair Daniel Levy on a tour of the construction site where the 61,000 capacity stadium will sit.

NFL executives have been in talks with the Premier League club all week to discuss ideas for purpose built facilities for the stadium. Last month, Populous principal Christopher Lee revealed a few of the ideas being talked about, such as family areas and creches for infants, so younger fans can frequent the stadium.

The stadium will feature retractable grass with an artificial surface underneath for NFL matches. The facility will stage at least two regular NFL season matches per year for a decade, and will also be used for leisure and entertainment events such as concerts.

Waller said he was "encouraged" by the shape the stadium was taking, adding that it "certainly whets the appetite for our games here".

"Our relationship with the club and the Tottenham community is a very important part of our future plans in the UK," he added. "We are excited to see the full regeneration plan come to fruition as a key part of creating a great experience for our team and fans."

To find out more about the Tottenham stadium project, click here.