Guy Smith, NFU Vice President, spoke at the recent TGA conference about the importance of British growers working together to influence Government and EU policy. 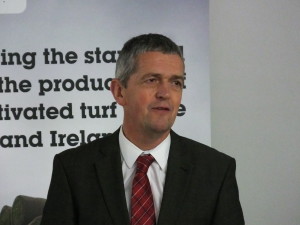 Whilst turf is a relatively small crop compared to cereals it, nevertheless, plays an important role in the landscaping and building sectors as well as specialist sports pitches. "Policies will be decided on many issues in the UK and across Europe and it is important that every sector makes sure their voice is heard." said Smith.

During a packed and varied programme delegates heard from Johnny Trandem from Norway on the challenges of producing turf in his country and the recent formation of European Turf Producers (ETP). Tim Fell, TGA Council member will be the first president and he informed the growers on the initial aims and objectives of ETP.

Paul Hammett of the NFU gave an update on the Abstraction Licence review and stressed the importance to growers that they will need to respond to consultation documents as they are issued. Jonathan Tame of BALI addressed the issues landscapers face. TGA Council member Stephen Edwards spoke about Health & Safety issues and the steps growers should take in case they have a serious incident on their farm. Jack Ward, British Growers Chief Executive spoke about collaboration between sectors and TGA Chief Executive Tim Mudge gave an overview of the work the TGA has done in the past twelve months.

Robert Adcock, TGA Chairman, said. "Once again we have delivered a fantastic range of speakers on highly relevant topics for our members. The TGA continues to promote and defend the industry and we have learnt today that we have an important role to play in trying to shape how the future of turf production looks in the UK for many years to come."