by Louise Prettyman
in Industry News
on 24 Jan 2016 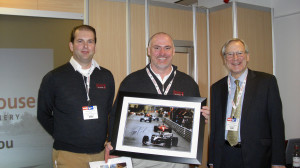 Nick's initial role was very much hands on as he started work in the workshop building machines. After a very short break, he moved in to a Sales Demonstrator role which led into becoming Area Manager for the South. It is here that his strong relationships with Charterhouse Dealers was formed and ultimately would lead to the position of Sales Manager, the position he still holds today.

Redexim and Charterhouse Director, Herman de Bree, commended Nick for all his hard work and support for the Charterhouse business. "His work with customers across all sectors of our industry and the support he has given to his dealers has been a key part of Charterhouse's success and growth over the years.

To show their appreciation for Nick's 25 years working with the company Herman, with his fellow director, Geoff Burgess, presented Nick with an original signed photograph of Damon Hill racing at the Monaco Grand Prix in 1996, the year in which Nick's hero won the F1 Championship.