by Simon Kars, Pitchcare Oceania
in Tennis
on 23 May 2009

Kooyong Lawn Tennis Club is the spiritual home of Australian tennis and has been so since 1892. The previous home of the Australian Open and numerous Davis Cup matches only touches on the club's rich and proud history. It continues to be involved with international tennis hosting the AAMI Classic each January, with top ranked tennis players, such as current title holder Roger Federer, participating in the event.

With approximately 7,000 members and a waiting list, head curator Nick Rennison and his groundstaff have a tough job maintaining the facilities around the club to the highest possible standards yet, year after year, continue to produce some of the best grass court surfaces in the country.

For nearly two years, Nick has worn the prestigious title as Head Grounds Manager at Kooyong. He has completed full trade qualifications, which is complemented by his vast experience on various golf courses.

He started his career as an apprentice at Kingswood Golf Club in the late 70s and early 80s and worked his way up to become superintendant. This then led him to the National Golf Club, where he worked for over twenty years, before coming to Kooyong in mid 2007.

No mechanic is present on site but, through mechanically orientated employees and some off-site work, most mechanical work required is completed efficiently. Nick is in the process of modernising Kooyong to achieve consistency and the best possible standards, while keeping up with the industry's new innovations and techniques.

When he first arrived at Kooyong, the club was totally reliant on potable water. This was seen as a major concern as the drought and water restrictions were beginning to impact on the club. He and the club embarked on a programme to obtain reclaimed water from Gardiner's Creek, which runs along the north boundary of the club underneath the Monash Freeway.

Over the last two years Kooyong has gone from being totally dependent on potable water, to using reclaimed water on 95% of the grounds throughout the club.

Sporting clubs all over Melbourne, and to a greater extent Victoria, have struggled in recent times, due to the severe lack of rainfall over the months of January and February when water was already a scarce commodity.

When I asked Nick how Kooyong has handled the dry spell he replied, "We've survived really well and our only concern is that Gardiner's Creek gets to a critically low level where we're unable to pump out of it but, so far, this hasn't been an issue".

Nick also commented that the water quality can vary a lot with salt and bacterial levels reaching concerning levels at times, which has to be monitored closely. The club are currently investigating a UV treatment to overcome any problems with the water quality.

Two banks had already been completed upon Nick's arrival, and the benefits were apparent to the club, compared to the four other remaining banks which comprise a mixture of all types of couch species and cultivars.

Nick is continuing the levelling and resurfacing programme to create a consistency throughout all of the grass courts, while achieving the highest possible standards.

When I asked Nick about renovations at Kooyong he mentioned that, "there are no renovations as such but, at the end of the playing season in May, we assess the condition of the baselines, because that is what get the most amount of wear. We have to judge whether the baselines need to be replaced and, over 90% of the time, they do".

The process involves cutting out the worn baseline area with a sod cutter and removing the old turf, applying fresh Merri Creek clay to the area and placing fresh washed 'Legend' sod on top of the clay. The staff then water and roll in the area so the clay comes up through the sod. The freshly laid turf is then left for the majority of the winter months until spring, when the sod becomes established and begins to grow. 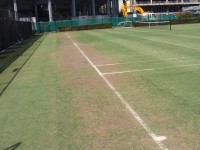 Since Nick has been at Kooyong he hasn't run into any major turf disease problems, with only the occasional small outbreak of Fusarium which is of no real concern. He sprays preventively for Spring Dead Spot and insects, which have also caused few problems. He will also apply granular fertiliser to the grass courts approximately 2-3 times during the playing season, depending on the condition of the playing surface, then to give the grass a colour boost liquid fertilisers are used approximately 3-4 times a year on an observational basis.

The machinery used to curate the grass courts largely consist of various mowers, both walk behind and ride-on, and rollers. Before Nick arrived the only mowers were ride on Toro mowers, but since then two Smooth Cut walk behind mowers have been purchased to give the grass courts a much better quality and more consistent cut between 3mm and 5mm in height.

Nick found that the ride-on mowers were floating too much on the denser areas of couch, creating a spongy effect and an uneven playing surface. The Smooth Cut Mowers have overcome this issue, proving to be an excellent purchase and a great asset to the club.

When asked if he scarified the grass courts Nick replied, "We haven't got any decent scarification equipment as yet, but we do a lot of dethatching to compensate, because it's important to get rid of as much as possible. I'm currently looking into getting some decent equipment, so we can scarify heavily once a year prior to the playing season." 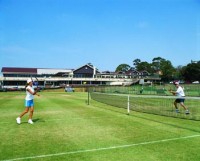 Before the start of the 08/09 grass court season, Nick purchased a laser guided line marker to replace the traditional wheel line marking method. "This machine has been a real winner since its arrival," said Nick. "The machine gives perfectly straight lines every time, giving each of the grass courts a sharp finish, whilst saving time and effort."

When he arrived at Kooyong Nick wanted to hire more groundstaff to increase efficiency at a more sustainable level, but he found this no easy task with the right applicants few and far between. When hiring he looks for applicants with the right attitude, who work hard and are willing to learn. It's only now Nick has got groundstaff numbers to his desired level.

The busiest time of the year for the groundstaff is between November and May when the grass courts are in full use by the members. A regular working day commences at 7.00am and concludes at 3.30pm, with a few coming in earlier to 'beat the traffic'.

Working on the courts can be very repetitive, with daily routines similar throughout the week. Both the En Tout Cas courts and the grass courts need to be prepared before play. This consists largely of the cutting, rolling, watering of baselines and net setting of the grass courts. On Mondays and Fridays the grass courts are closed for maintenance to allow Nick and his team to mark out the lines and attend to any other ongoing maintenance requirements.
Prior to play, the En Tout Cas courts are bagged, nets are set, lines are swept and any general repairs are undertaken as neccessary.

During the AAMI Classic Tournament, staged on the centre court flexi-cushion surface, the groundstaff are only required in the setting up and dismantling of infrastructure before and after the event. Very little preparation before the tournament is required on centre court from the groundstaff, other than maybe giving the court a wash and setting up the net. 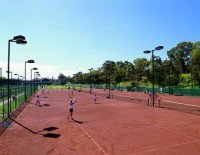 One of the major challenges Nick has faced is being able to compare the grounds at Kooyong with other tennis clubs, as he was new on the tennis court scene. The only other comparable venue in Melbourne is Royal South Yarra Tennis Club. This is where Nick met their grounds manager, Bill Turner, who Nick says "has been very helpful throughout my integration into Kooyong".

"It has been quite a steep learning curve, coming from a golf course background to here where things are totally different. It's been good though, because I've worked on golf courses for so long. It's been very interesting to take on new challenges and to learn new procedures and to do something different"

Nick came to Kooyong Lawns Tennis Club with a fresh outlook and a new way of thinking, which has already started to reap benefits for the club and the playing surfaces.

His attention to detail, modern approach and the high standards he demands have set the tone for his groundstaff.

This has enabled Nick and his team, in just a very short time, to improve the quality of the playing surfaces for its members.

"It's not like a golf course where you can come in, redesign things and make drastic changes" he says. "If I can produce a playing surface to the best of my ability and, at the same time, keep the players and members happy, I would feel that I have achieved my main goal at the eventual conclusion of my time here at Kooyong - whenever that may be!"