"Still dunno how it happened, either," the SCG curator shrugs, reaching once more for that Longbeach packet tucked inside a pocket of his blue tradie pants. 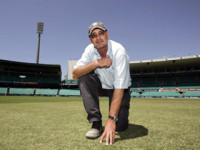 "Couldn't believe it. We pulled the covers back here one morning to find water hadn't just got through a tiny hole in the first cover, but pooled and run uphill ... uphill ... to get beneath the second. Got me beat, that one.

"Leaning against a heavy roller in the early morning gloom, Parker has been asked to explain the hazards of living within his mob. Of existing among the dozen groundsmen who, every summer for the past 15 years, have worked alongside this softly spoken boss who, as a boy, dreamed of farming roses like his grandfather Ned.

Joining this anonymous group of fellas who, in their trademark blue uniforms, devote four months of every year to a strip measuring just 22 yards. A gang who can differentiate their broad pitch brooms from courser crease brooms while handling more grass than the Nimbin boardriders' association.

And when it rains?

"Well," Parker deadpans, "I'd back us to have hessian, covers, everything on in under three minutes."

But not now. No, now just after 5am, six of us walk on to the SCG to be greeted only by a rising sun and that overwhelming silence which, the curator says, he has found nowhere else but his waterfront Hawkesbury River home.

Call it the perfect ruse.

For what peace is there for a boss who worked 12-day stretches before Christmas and eight of the nine since? Whose office beneath the Bradman Stand has two screens monitoring weather, while even the practice nets need two permanent staffers.

See the article on the following link Telegraph.com.au