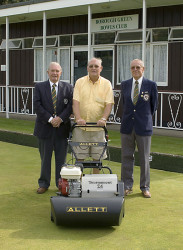 Ask bowls greenkeeper Chris Lightfoot to name the most impressive feature of his new Allett Tournament 24 mower and the response is immediate: "Its manoeuvrability, which is absolutely superb," he said. "Having the ability to turn smartly and easily at the end of a run has cut significantly the time taken to mow the green without any sign of marking."

Purchased by Borough Green Bowls Club in summer 2009, the Tournament 24 had been recommended to the Kent club by local firm, Kidman's, which has serviced the club's machines for many years. Although not an Allett dealer, Kidman's advised the committee that Allett mowers offered sound performance and excellent value for money.

Following a call from the club, Allett promptly arranged a demonstration of the mower, giving Chris Lightfoot the opportunity to get behind the controls. "As well as being very easy to turn, the mower's cut was first-class," he recalled. "I remember being impressed also with its ease of starting, low noise levels and the ultra fine adjustments provided for height of cut and the turf groomer fitted as standard. I'd never used a groomer before, but I could see that its action would soon have a beneficial effect on the condition of the green."

Within four weeks of the arrival of the newly-purchased mower, the benefits of grooming and cutting consistently at a height just below 5mm were clear for all to see, as club president, Iain Ferguson, explained: "The condition of the playing surface had improved beyond belief. So much so that our bowling performances away from home were being adversely affected due to the time we were taking to adjust to the often poorer and less consistent condition of our opponents' greens.

"The support and advice we received from Allett was first class from the start. My advice to any bowls club considering a new mower is to make sure that Allett is on the short list. Buying the Tournament mower is one of the best decisions taken by Borough Green Bowls Club in recent years."