0 No break at Belle Vue

No break at Belle Vue 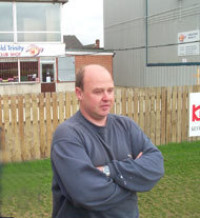 There never seems to be a quiet time of the year here at The Belle Vue Stadium in Wakefield. With both football and rugby league we don't really have a proper closed season, and this year my window for renovation lasted just one week. Unfortunately that one-week happened to coincide with torrential rain, making the job even harder to complete.

I've worked at Belle Vue for fourteen years in total, starting off cleaning the dressing rooms and stadium after matches. At that time Wakefield Council used to own the stadium, but eight years ago they handed the venue back to the clubs, and I was asked to maintain the playing surface as well as the other duties. We now employ contract cleaners for the stadium and dressing rooms, but I still wash the kit for Wakefield and travel with the first team and U 21's as their kit man.

Our pitch renovation this year started on the 26th April straight after our last football match and the next rugby match was played over the Bank holiday on Sunday 2nd May. The Super League had started on the 7th March and it's these crossover periods that are the hardest times in the spring and the autumn. At these times I call my Dad in to help take posts down and put up goals, he must be the oldest grounds assistant I know, and I'm sure he only does it to get out of the house, away from my Mum.

Due to the wet weather, it was difficult to work the sand in as it tended to smear across the surface, but there were periods of dry weather and in the end I got the material brushed in well.

I didn't scarify the pitch because there didn't seem to be a need for it. The amount of combined games played on it makes for a wonderful job of removing any organic material settled on the surface. Working on a limited budget, I felt that the money was best spent on more seed, deep aeration and sand dressing instead.

We don't have any pop-up irrigation here, just a small travelling sprinkler, but with the weather that we've had this year, it has not caused too many problems for me.

I cut the pitch with an old Ransomes Mastiff; this helps to get a great presentation on the pitch, particularly because we tend to get a lot of TV coverage with Sky. I try to keep the grass a little on the long side; at the moment I'm topping the pitch at 2" (50mm), which seems fine for the rugby league lads. It is too long for football, particularly in the summer, but until someone starts to complain I'll leave it as is.

Our first pre-season friendlies for the football start on the 21st July, so there isn't much of a break in the football season either. We then have two months of dual use, sometimes with football on Saturday and a change around to welcome rugby league on the Sunday. Roll on September, when I can put the rugby posts away for six months, and just concentrate on the football!

My aeration equipment is a bit limited; I have two Dabro slitter/spikers, one of which is too big for my small compact tractor to pull. I try to spike the pitch quite regularly as time permits, but overall the surface drains very well.

In total we have about 80 games per year played on the pitch and other than my short week of renovation, I just carry out the usual remedial work after games. At the moment I just seem to be cutting grass every day. With

I usually get approval for the materials that I need from the club. In the past it used to be tight for purchasing materials, if I went and asked for ten bags of seed they would maybe agree to buy only five. These days they realise that what I ask for is what I need although I now tend to buy products by the pallet load, so that I have seed and fertiliser available whenever required.

This summer I've also bought myself a small fertiliser spreader that fits on the back of my tractor, this has reduced the time taken to feed the pitch, and also provides a more uniform spreading pattern, eliminating 'misses'.

We don't have any training facilities of our own, so the rugby lads tend to train on the pitch before their games, usually on a Thursday and Saturday morning, even if we have a football match on Saturday afternoon, the Wildcats squad will come in and have a training session on the surface in the morning. They're not too bothered about the football, so I make any repairs as best as I can, before the Wakefield and Emley lads get in for their match.

One thing's for certain, I'll never get bored of this job; there's always so much happening.