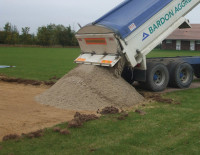 Back to Vicky Pollard's mantra - yeah but no but yeah but ... ever had the 'Yes, but ...' response to a perfectly valid question? That's the kind of reply you might get if you pose a question such as 'Can we change the loam in our cricket square?' Well, yes, but....

Conventional wisdom has always dictated that a groundsman should never change the loam in a cricket square. These days, that kind of inherited wisdom is being challenged by the fact that clubs, from county grounds to village square, have made the move and found success after their change has been made. Many have been deterred from taking just such a course of action due to the kind of doubts that creep in when major change is considered.

How can a change in loam happen in practice?

A groundsman would normally be expected to know the fabric of the square they were working on. If the origin of the loam is not known, various laboratory testing and expert opinion can identify the kind of loam in situ. In essence, if you don't know the type of loam you're working with, try to make a point of finding out what it is, and quickly, as it will have a major bearing on many of your square management decisions. 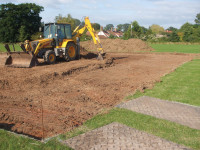 Let's assume we know from which loam the square is built. Without mentioning producers, manufacturers or merchants of loams at this stage, here are six major 'types' of loam (in no particular order), governed largely by location, that are used on UK, Irish and EU cricket grounds:
• Kettering
• Surrey
• Banbury
• Essex
• Mendip
• Indigenous

The first five locations represent the bulk of cricket loam used in squares, certainly in terms of new build and topdressing. If the land on which a ground is constructed is found to naturally contain a viable clay loam, then there is no reason why this cannot constitute the fabric of a square, thus describing the sixth option in the list.

What groundsmen in this situation need to ensure, however, is that they can identify a suitable source of compatible topdressing material for future years, as indigenous soil is difficult to obtain in the right form for end of season work on most occasions.

Of the main five 'types' of loam, some are more compatible than others when combined. An example of this can be that, one of the heavier clay GOSTD Surrey Loams could be more easily blended with a Kaloam than could a Mendip, as the Somerset clay loam (i.e. Mendip) is considerably lower in clay content than either the GOSTD or Kaloam soils.

That is not to say that the Mendip cannot be mixed under any circumstances with the higher clay content loams, but the wide disparity between the soils makes the blending process all the more difficult and prone to possible pitfalls. It all comes down to the thoroughness of the method of incorporation chosen by the groundsman and club involved as to the likelihood of success, or otherwise.

How can we make this change of loam in practice?

Let's look at the starting point:
1. We know the loam with which we are working currently

2. We know which loam to which we would like to change
3. We have the equipment, or have identified a contractor with whom we can work, who has the necessary machinery and expertise
4. We have a specification to which we can work for a successful conclusion

There are two options - either to completely rebuild the square and start from scratch, or to incorporate the new loam with the soil that is currently in the square.

Let's consider the possibility of incorporation initially. If the decision has been made to change from one loam to another, we have to ensure that the new loam is fully incorporated within the existing profile. Effectively, if we incorporate, we are creating a brand new type of loam - a hybrid between the two types involved. Along with making the correct choice in loams, we have to have a good knowledge of the current square in order to be able to make accurate calculations for the scheme in hand.

Why can't we just topdress the current square with a new material?

Shrink and swell characteristics are invariably different between different types of loam. This means that, when moisture is absorbed in to the loam, the absorbtion rate is greater or lower according to characteristics in each type of loam, such as available pore space. 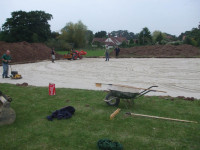 If grass is grown through one layer into another, differences in shrinkage can result in grass roots becoming sheared (they are effectively cropped off by the different forces at work moving in different directions and/or at different speeds), and sometimes roots are persuaded to grow in a horizontal fashion between layers. This has a clear knock on effect, as we require a cricket square, at times, to be 'soil held together by roots'. We, therefore, need the roots to grow as vertically as possible and to act as mini anchor points upon which the soil is bound together.

How do we incorporate the new loam?

In order to achieve this efficiently, we need to break up the profile of the existing square to a state where the new medium can be mixed in and to create a new homogenous whole. Here we require our in depth knowledge of the existing square. If the square is ten pitches wide (100' or 30.48m) and is built 80' long (24.38m), and has a depth of 4" (100mm) of loam, we have a volume of 74.31m3 of existing loam. In order to get a meaningful incorporation of new loam, we would need to include 50% new material and mix with the current square loam. We would, therefore, need to be buying 37.155m3 of the new loam, or around 56 tonnes, depending on the type of loam that has been chosen. 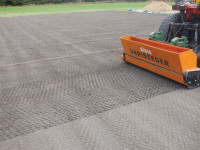 By using a Koro Field TopMaker or GKB Combinator, we can remove the top of the square (grass growth) by means of fraise mowing. Once the green has been removed, the machine can continue to work down in stages and produce, in all likelihood, a loam that can be reincorporated with the new loam. If there is any doubt, then the material ought to be screened on site to remove any unsuitable lumps or impurities. This should continue until the bottom of the loam layer has been reached. The last cut, where loam and existing soil meet, can be disposed of on site. All clean excavated loam needs to be stored to one side on site for re use.

When the bottom or 'formation' level has been reached, the action of the blades can create a 'polished' surface which could represent a new form of compaction pan unless addressed at this stage. By breaking up this compaction with a scarifier, or changing the blades to linear aeration on the Koro or GKB, we can avoid any future layering issues at this depth.

A very useful addition to the soil amelioration process can be the use of the deep drill. It is at this stage that the process can be most useful, although the option 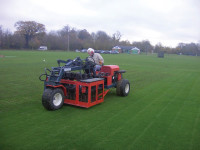 exists for drilling through the profile once the operation is nearly complete. For now, let's consider the action whilst the formation layer is exposed, as this can create a link between this level and the new mixed loam above.

The drills basically penetrate as far down as is required to a great depth (easily more than a metre if ground conditions allow), and these form deep set anchors to the main loam formation. This method has been widely used since its early adoption to cure problems at the Test Match ground at Trent Bridge in 2003, when a similar operation was carried out. Here, the vertical lines of loam acted as pins to hold the profile together, with the loam literally being hand fed into the apertures created. It can be a highly effective addition to any major renovation or reconstruction scheme in cricket.

With the base in a state to receieve the new material, a mix of our excavated loam and the fresh loam can be loaded to spreader and spread along the base to create an even layer. Having worked this mix into the deep drill holes, this can be even more effective. By judicious heeling, an even consolidation can be achieved in each layer until the final consolidation takes place, with the finished level slightly proud of the existing surface (by between 10-20mm) to allow for extra consolidation once rolling takes place. 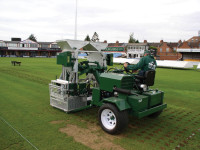 Seeding and fertilisation can then happen to complete the works.

By mixing the soils we are attempting to do, in a short period of time, what takes Mother Nature millions of years to do by breaking rocks down in to soil by the action of glacier and prevailing weather.

The blending of soils through the spreader, for use in the process, can effectively amalgamate the soils, and the change in the nature of the square should be noticeable in a short period of time. The square profile needs to settle down over the winter and, after rolling has taken place, we can look forward to a change in performance corresponding with our stated aims.

This form of action can be a welcome relief to the problems of some, whilst an obvious drawback would be the expenditure involved.

To create a new square of ten pitches would cost in the region of £30,000 plus VAT. To carry out all of the process described in our incorporation scheme, the cost is 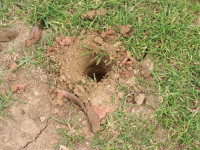 still going to be two thirds of that, with no guarantees of success. The difference between success and failure with this course of action can be very fine indeed, so it has to be carefully planned and implemented to get the right results.

Problems of loam supply have come and gone over the years with varying regularity. Once, Garfitts Loam from Cambridge was the strongest in terms of binding strength available yet, now, it is a thing of the past. We have to trust that suppliers and manufacturers redouble their efforts and loam supplies become reliable once more. What is sure is that a vacuum never lasts for long, so the gap in the market is sure to be satisfied before too many more weeks go by.

With the network of ECB County Pitch Advisors and reliable contractors available, there has never been such a good time to get expert independent advice. Vicky Pollard might come across as indecisive, but clubs need to make decisive choices in difficult circumstances if short term damage is not to be turned into long term disaster. Get the right kind of advice and the travails of 2010 could lead to new triumphs in Olympic Year 2012.