The first six months in the UK market have been a great success for Japanese outdoor power tool giant, Maruyama since it launched at Saltex 2011. The launch 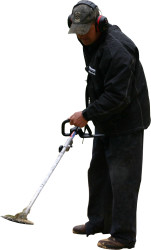 and distribution of Maruyama in the UK has been handled by Leicestershire-based importer DMMP.

The Maruyama range includes trimmers and brush cutters, multicutter systems, edgers, blowers, hedge trimmers and accessories but it has been the landscape blade which has caused the largest stir.

"We have presented the landscape-maintainers of the nation with a blade which doesn't throw up grass, stones or debris and the collective sigh of relief has been really audible," jokes DMMP Commercial Director Colin Hood. "Golf clubs, leisure facilities, hotels or indeed anywhere which needs to maintain grass near parked cars, solar panels or glass windows have really appreciated the landscape blade's unique neatness of operation."

As well as not 'firing' gravel at the nearest parked car, the blade also leaves clippings where they are and doesn't throw them up at the face of the operator. For landscapes with water features, the Maruyama blade can also trim grass edges which are submerged. "It has been described as a dream come true by some customers," adds Colin. "As well as its remarkable neatness with debris, it has precision cutting and it self-sharpens with a scissor action."

Maruyama products have been made in Japan since 1895, with a reputation for extraordinary quality, rugged durability and superior performance they are often described as 'tools designed to earn a living'. DMMP's confidence that the home market would appreciate the range's dedicated innovation and manufacturing excellence plus its industry-longest commercial warranty has been proved right.

Maruyama began as a family business making fire extinguishers. Manual sprayers joined the production line in 1918. Development of a power sprayer in 1933 meant that Maruyama played an important role in disaster control and prevention as well as food production in the agricultural industry during the post-depression years. Today Masanobu Ogashira continues the commitment that began with three generations of the Uchiyama family. Maruyama has joined DMMP's stable of top quality imported products including Chapin, EarthWay and PolyWood.

For more information about Maruyama, please contact Colin Hood at DMMP Limited on 0845 643 9776 or visit www.dmmp.co.uk