0 No interest in old fashioned research 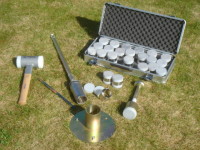 There doesn't seem to be as much interest in conducting research into the 'pure' science side of sports turf these days. We frequently find ourselves referring back to scientific publications going back twenty or thirty years when trying to solve problems for our clients.

The most useful subjects relate to things like particle size distribution in soils and sands and its relationship with hydraulic conductivity and pore space. Or field measurements of infiltration rate and bulk density.

These are all entirely pertinent features in relation to the performance and improvement of natural turf surfaces. In fact, I would say that most of the situations we're asked to deal with from a technical point of view are concerned with these very important areas of turf science in one way or another.

I think this lack of recent research is because the kinds of investigation these subjects require are, by their nature, slow to generate data. They also require a good deal of specialist and expensive scientific equipment and a lot of understanding on the part of the researchers. Trials and investigations are, therefore, costly to undertake. 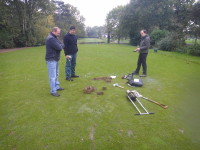 What seems to happen is that research money follows those lines of enquiry that are most likely to generate sales of 'stuff' in a relatively short timeframe. Stuff like pesticides, fertiliser supplements, soil microbial products; investigations in these areas are able to generate data quickly on the basis of 'spray it and see'. However, it seems to me that this work is not advancing the science of sports surfaces as rapidly as research in other areas once did.

Some months ago, I wrote in these pages about the possibility of developing a 'grand unifying theory' covering the key questions surrounding drainage, moisture retention, attenuation etc., and relating to both natural and artificial surfaces. Since then, we've continued to look at this in great detail and are currently concerned with the relationship between particle size distribution in growing media, porosity and hydraulic conductivity - seemingly very old and unfashionable subject areas. 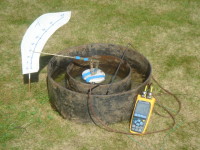 We're using client materials to look at these things in much greater detail than we would normally do in order to answer questions to their satisfaction. The connections we are making between people's actual experiences of natural turf surfaces and the technical data pertaining to those situations is proving to be enormously interesting and informative.

On looking through the literature, what has been a revelation is the amount of perfectly relevant information that has already been published, much of it many years ago. To discover this, one often has to look outside of the turf industry, for example in the areas of tropical agriculture or filtration, obscure and esoteric areas that never mention sports turf.

The Hooghoudt equation is famous to many people and it has been around for a long time. It determines the separation at which lateral pipe drains should be placed in order to achieve an adequate degree of drainage in natural soil. It requires the input of the hydraulic conductivity of the soil above and below the pipe depth, and one would imagine that this was directly relevant to sports pitch development.

The science behind the equation was, however, founded on agricultural principles, not on those of sportsturf management. In particular, the equation considers the soil properties of the material above the level of the pipe drain installation as a whole and as a single entity. In sports turf situations, of course, this region is extremely variable and cannot be defined in such a simplistic way.

Nevertheless, Hooghoudt provides a basis from which to start building a more complex model. Such a model might incorporate the finer points of sports pitch construction, for example the different values of hydraulic conductivity of topsoil and subsoil, the effects of treatments such as sand banding or the incorporation of a sand carpet, the use of rootzone materials or other amendments and soil structural factors, and the effects of treatments such as verti-draining or slitting. 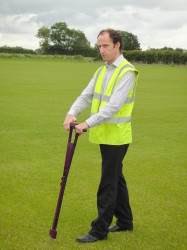 The science behind artificial sports pitch construction, due to its much simpler nature, is now very well understood. Moreover, it is understood in exactly these terms relating to the properties of soils and aggregates; total pore space, CBR values, subsoil infiltration rates etc. Such pitches may be designed, specified and constructed with little doubt as to the outcome in terms of success or failure as a consequence of design principles applied in the context of individual sites. The costs associated with designs may also be accurately predicted long before any work has taken place on the ground, and this is a major consideration for all clients.

For the same to be true of natural turf surfaces, the equivalent fundamental principles need to be defined and applied in exactly the same way.

The variability of outcome due to unforeseen factors, previously defined as 'natural' phenomena (and therefore not to be fully understood), need to be eliminated in order that natural turf systems may become, once more, the preferred playing surface for most sports. This is very difficult to do, because the factors concerned are so very complex.

Soil and growing media are hard to understand fully, but the industry must not lose sight of the need to keep doing this if sport on natural grass is to continue at the highest levels.