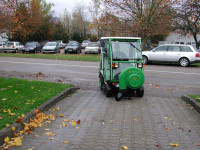 Following the droughts, the pundits are predicting an early autumn - since most lawns, fairways and parkland are surrounded by trees and shrubs, those faced with tidying up the leaves and debris tidy-up operation could to be faced with yet another headache.

Purchasing dedicated equipment for clearing up after Mother Nature is not only expensive; it means that for most of the year this seasonal machinery lies idle. Etesia have a cost effective solution with their Hydro 124 ride-on rotary mowers. Whilst providing mowing efficiency during the growing season, these versatile 124cm ride-ons also make light work of tidying up leaf-fall and other debris.

All material is 'sucked up' via the machine's cutting and collecting system into the 600 litre rear collector. The operation is speedily completed in one pass without the need to introduce a second piece of equipment. Applications include large areas of grass on parkland, fairways and lawns as well as paths, roadways and hard surfaces.

To further increase productivity, a 'quiet' front-pto-mounted blower is available - it is easily fitted in a couple of minutes without the use of tools. Hydraulic drive makes it incredibly quiet in operation and there is none of the vibration levels associated with hand-operated blowers.

Operation, including stop/start and control of the direction of blast is carried out from the driving seat. The blower can swivel through 180 degrees, allowing leaves and litter to be windrowed in any direction chosen by the operator - this can be varied whilst the machine is in motion, thus enhancing the efficiency of the cleaning-up operation. Because the unit is front-mounted, all debris is caught in the blast - nothing is flattened by the ride-on's wheels, as can happen with rear-mounted units.

Etesia's Hydro 124D ride-on rotary has superb collecting capabilities, so all windrowed material can be 'sucked' into its large collecting box in just one pass. In this way, the clear-up operation is efficiently completed without the need to introduce a second piece of equipment. The blower can also be used to blow water off sports surfaces.