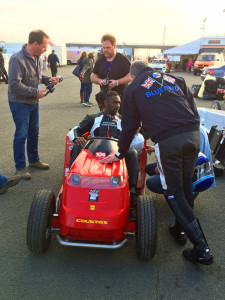 In preparation for taking on some of the toughest speed disciplines, with mentors including Ari Vatanen and Jimmy McRae, the Golden Globe winner and star, who played Nelson Mandela in Long Walk to Freedom, gets to drive Runningblade, the Countax-built British lawnmower that set the world record at 87.833mph on Pendine Sands in 2010. Originally the setting for Sir Malcolm Campbell's land speed record of 150mph in 1925, Pendine once again provided the opportunity to break a world record when his grandson, Don Wales, took Runningblade into the Guiness Book of Records. Countax prepared the machine using 90% lawnmower parts, with the other ten percent being the safety roll cage and road-going tyres. Before the record attempt Don had to show the Countax could mow grass, to comply with the rules.

Five years on, it is Idris Elba's turn to get behind the wheel and for the Discovery UK programme he meets up with Don Wales who takes him onto the famous Santa Pod quarter-mile drag strip to get into the zone and take on Runningblade. "If you get to 70mph you've done well," says Don as he and the current Countax engineering team talk Idris through the controls and modifications on the lawnmower. "I'm excited to do it actually, I want to go," says the actor, who won a Golden Globe for his role in the television series, Luther. He picked up his interest in cars at an early age and worked alongside his father in the Ford factory in Dagenham before becoming the well-known actor he is today.

He successfully keeps the lawnmower in a straight line down the quarter mile and as he passes through the timing lights he's given the confirmation of Runningblade's speed. "I did 65mph, certified." He enthuses and even though still wearing his racing helmet his thrilled expression reflects the fact he's pushed the Countax lawnmower through its paces. The video clip of Idris and Running Blade can be found on Discovery UK, 'Idris Elba:No Limits Episode 4: Behind the Scenes - the World's Fastest Lawnmower.