0 No news is good news for the ODA 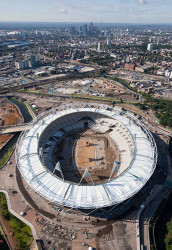 With just under two years to go until the start of the 2012 Olympics, it is, perhaps, surprising that progress at the Olympic stadium and surrounding venues, receives little media attention.

In stark contrast to the Wembley stadium build, which was delivered late and massively over budget, resulting in high profile media coverage, the Olympic Delivery Authority (ODA) - responsible for building the venues - is set to deliver the 2012 venues on time and under budget and, for its chairman, John Armitt, that's a source of great satisfaction.

"So far, so good and on track, he said. "It's very satisfying. This time next year we'll have some completed stadia out there, ready to hand over to Sebastian Coe and his team."

"We've kept costs down just through constant pressure on every single building. The designers sit down with the contractors saying how can we do this differently, how can we take out cost? We did that quite successfully in the broadcast centre [the first building to be completed], and we're doing it in all other areas."

"Everywhere you look you just have to re-question and say 'that's okay, but could we do it better, and could we do it more sustainably', which is the other challenge all the time."

"The key thing is to recognise the terrific job our construction industry has done, whether it's the architects, designers, contractors, sub-contractors. everybody has worked really well, and it's a great advert for British industry."

The ODA will move back into the Park once the Paralympic Games have finished to transform it into legacy mode.

Mr Armitt, an Arsenal supporter, was keen to see the stadium used regularly, even if it means a football team moving in. "I don't mind, personally, who uses it, as long as it is used and it does not become a white elephant."

"A football club going in there does give you a lot of assurance that it's going to be used regularly [the current front runners are West Ham and Spurs] but we gave a commitment to the athletes and that's an important commitment to continue to meet."

"We've got other people, like the owners of The O2, showing an interest and, clearly, they would have other plans. The important thing is we get regular use from it and people enjoy going there."