0 No rest for new chairman

No Rest for New Chairman 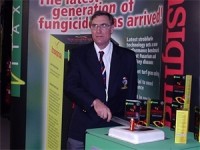 Bigga's new chairman Kerran Daly was put hard to work on the Vitax stand less than 24 hours after donning his official blazer. Not only called upon to pull the winning ticket out of the hat at the company's annual greenkeeper's draw, but also to cut the birthday cake for Insignia, Vitax's best selling fungicide launched at BTME last year.

Steve Millard, head greenkeeper at Bury St. Edmonds golf club in Suffolk took the prize of £150 worth of Bigga vouchers, and the cake was enjoyed by all.