The pitch at the Greater Manchester based DW Stadium - home of Wigan Athletic FC and Wigan Warriors has seen a lot of activity in the past year. Nineteen games have been played since the pitch was renovated at the beginning of last June - including two Europa cup fixtures - and the turf is still looking and performing great. 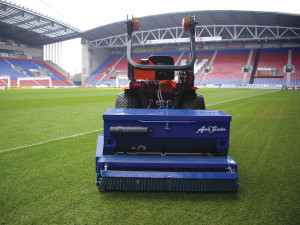 Ian Forshaw is the Head Groundsman in charge of maintaining the grounds to the highest professional standards and says the quality of the turf is in no small measure down to the efficiency of the Raycam Aeraseeder.

Raycam Aeraseeders are a range of professional tractor mounted, heavy-duty '2-in-1' overseeders designed for overseeding greens, tees and sports pitches with minimum disruption to the surface. The unique angled coned rollers produce approximately 1750 holes per square metre with a rear mounted brush to sweep the seed into the holes.

"We purchased the Raycam Aeraseeder 1.2metre machine following a demonstration and preferred it to our current method of over-seeding," he said. "The precision placement of the seed with the dimpled front and rear rollers is so effective that I can genuinely say we achieve as near to 100% germination as you can get - absolutely no waste whatsoever!."

At the beginning of last October Ian used the overseeder again to trickle a small amount of seed into the turf. "Accurate calibration gives us this option," said Ian. "We still had another ten games to complete this side of the New Year and adding seed in this way provided a solid, strong and healthy sward to keep the pitch in great condition."

Another benefit Ian noted was the Raycam Aeraseeder rear brush also helps with surface hygiene by removing any surface algae as it passes while also lifting the grass up.

Ian has the smaller width model but it still only takes approximately three hours to complete the whole pitch.

Now well into this year it has proved itself invaluable and is used regularly on the training grounds to overseed the well-used goal mouths.