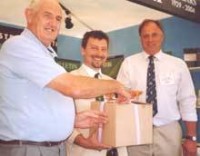 Dr. Tim Lodge, senior agronomist and southern area manager for the Institute who hosted the proceedings, praised the awards saying that they acknowledged the hard work of ordinary groundsmen and greenkeepers that keeps the entire Turfgrass Industry moving. "They are the absolute opposite of the self promotion that so often leads to less than ideal individuals occupying the limelight," he continued.

Dr. Lodge is one of a three man judging panel, including Gordon Child of BIGGA and Derek Walder of the IOG, which will send one groundsman and one greenkeeper to the South of France next year for a week's holiday with their families. Terrain Aeration provides the hire of a village house in Lanquedoc, while sponsors Turf Professional Magazine and Pitchcare.com provide travelling funds.

Terrain Aeration's Unsung Hero Awards are open to all U.K. practising greenkeepers and groundsmen, judged by their contemporaries or clubs to regularly put in that little bit extra. Nomination forms can be found on the pitchcare website, inside the October edition of Turf Professional, or from Lynda Green at Terrain Aeration Tel: 01449 673783.