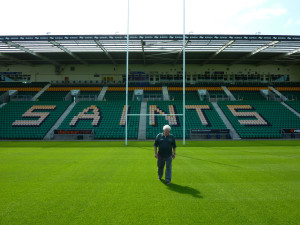 Northampton's final match of the regular season, last weekend's hearty romp at the Stoop with Harlequins, was a most enjoyable but peculiar affair. Neither side seemed entirely sure at the end whether they meant to win.

Harlequins made a big break for it to open up a 22-5 lead at the beginning of the second half. That shamed Northampton, as much as anything else, into giving it the big I Am Too, so that they pulled it back to 22-19 with two tries in five minutes, the second a stunning effort that featured most of the team.

And then … well, panic, really. The benches were emptied, the contest all but suspended. Are we supposed to win this? Yeah, I think so. No, wait …

The Saints director of rugby, Jim Mallinder, accepts it was an unusual situation, a dilemma between travelling to the lairs of Leicester or, as they will be for Sunday's second Premiership semi-final, Saracens. "They're two tough teams," he says. "The problem with Saracens is the artificial pitch, but playing in front of 10,000 people, probably more than 2,000 of whom will be our fans, it won't be quite as bad in terms of the atmosphere. Leicester, in front of 24,000, is always a difficult place to go. So it's hard to judge which is the hardest assignment."

To acclimatise to the challenge, Northampton trained last week in Kettering on an artificial pitch similar to Saracens'. They will hope that is preparation enough to become the first visitors to win at Allianz Park.

"If we had a choice, we wouldn't opt to play on an artificial surface for the semi-final," says Mallinder, having steered his team to it on grass ones. "But we're not moaning about it. We've trained a little bit on these surfaces during the wet months when we have to keep off our field. The lads quite enjoy it. It's fast. I guess it gives Saracens an advantage, as they're used to it, but we're not too worried about it. The bounce of the ball can be awkward, so, as the old rugby saying goes, don't let the ball bounce."

The reference to having to keep off their field is instructive. Northampton boast the most famous groundsman - and invariably the best pitch - in the country. "I don't think I can repeat what Piggy [David] Powell thinks of artificial pitches! He's a farmer and he enjoys his job. There's no danger of us ever getting one with him around. We can look after our surface well enough, even in the harsher conditions."

It feels as if it was ever thus - Saracens and Northampton disagreeing on things. The prospects for a lively encounter are fair, even without all that is at stake. For both sides, this a fourth consecutive semi-final. Not only did Saracens manage to win the first of theirs on that hallowed turf at Franklin's Gardens in 2010, they went on to become champions the year after that. Northampton, meanwhile, have lost every Premiership semi-final - five in total - they have played in, which leaves them feeling less than happy about themselves. And this season, they have endured some hideous ignominies, including, as recently as six weeks ago, a 36-8 defeat at home to Leicester, rivals quite possibly more bitter than Saracens.

Read the rest of the article on the following link :-The Guardian