by Simon Kars, Pitchcare Oceania
in Cricket
on 03 Aug 2009

South Wales has always been regarded as the hotbed of Welsh cricket, with big clubs around Cardiff and Swansea feeding Glamorgan CCC. But one should not disregard the clubs to the north-west, which possess some of the best pitches and playing surfaces seen for hundreds of miles around. 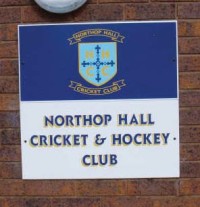 One such cricket club is Northop Hall Cricket Club, located thirty miles west of Liverpool, just over the Welsh border. The club is the spiritual centre of the small village of Northop Hall, where lifelong members support the club through sheer dedication, passion and tradition, as well as the occasional pint or two.

The club hosts several matches between Welsh Minor Counties, and was the chosen venue for the Wales MC v Middlesex NatWest clash in 1994. Middlesex captain Mike Gatting commented on the quality of the ground saying, "the pitch is better than Lord's! It's the best ground I've played on for a couple of years."

2008 was the club's centenary year, and a whole week of celebrations to mark the occasion included an exhibition match against the world's oldest and most famous cricket club - Marylebone Cricket Club (MCC), with Australia's Callum Ferguson in their line-up, and an 8-a-side competition against Lashings, with big names such as Alvin Kallicharran, Allan Mullally and Chris Harris taking part.

During the summer of 2008 I played for the club as a semi-professional, flying all the way from sunny Melbourne, Australia to play for their 1st and 2nd XI teams, competing in the Liverpool and District Competition. 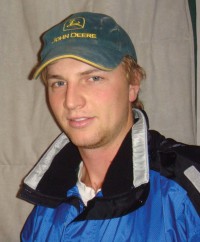 As well as playing cricket, the club employed me as assistant groundsman over the playing season, due to my experience as a greenkeeper at Riversdale Golf Club back in Melbourne. It was an area of turf management I hadn't experienced, but I was looking forward to learning the methods and procedures employed by Head Groundsman, George Groves.

I first met George during the first week of my trip - in the bar, Well, I am Australian! He was enjoying a pint of ale and socialising with other life members. I sat with George (with my own pint of lager) to introduce myself and find out what he expected of me. From that point we became good mates, creating the foundations of a great working relationship at the club. 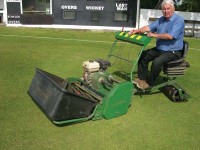 George isn't paid a penny for his countless hours of work on the ground each week. He does it out of pure love and passion for the club. His down to earth attitude and dedication continues to produce high quality cricket pitches and playing surfaces every season.

The clay based outfield is far from the conventional sand based outfields, but the results are of the highest quality, with drainage rarely becoming an issue. A mixture of different turf grass species are established over all playing surfaces, which include chewings fescue, browntop bent, perennial ryegrass and annual meadow grass.

The clay loam wicket is approximately 12 pitches in width which are used for senior fixtures, with two more provisional pitches used on the east and west sides of the wicket when junior fixtures are played. The outfield is surrounded by a white picket fence which reflects the character and tradition of the club, along with clubhouse and viewing areas overlooking the city of Liverpool.

The wicket, on many occasions, has been described as a batsman's dream and, subsequently, a bowler's nightmare! Apart from the odd wet wicket, when rain has been prolific prior to a match, the consistency of the pitches prepared are second to none, which is reflected in the high scores often produced on match days. 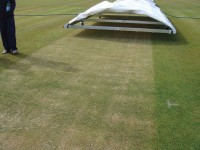 Prior to the start of the cricket season in April, preparations to the ground and its surroundings are undertaken to bring the venue up to code. These include applications of a liquid 'weed and feed' on the outfield and wicket, strimming and mowing around the boundary, rolling out of the boundary rope, servicing machinery, positioning and general maintenance of site screens, maintenance and testing of the electronic scoreboard, as well as any other general maintenance jobs.

During this time the outfield is mown at a height corresponding to the rate of growth, therefore a higher mowing height is usually set to reduce clippings and scalping damage. The height of the cut will drop as the season nears until the desired height of around 8-10mm is achieved. This gives the batsmen full value for their shot, especially when conditions are dry.

The entire wicket is mown at the same height, with individual pitches mown at a height of approximately 5mm. This leaves a good amount of grass on the pitch to hold the clay together in dry conditions, and during general match play. 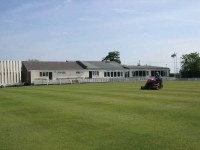 Much of the machinery has seen better days and, as the saying goes, are "oldies but goodies". A second hand Toro Reelmaster 2300D, with a cutting width of 72 inches and a cutting height range from 6mm up to 45mm, is used around three times a week, especially when the desired cutting height is reached, to minimise clippings left on the outfield. The Reelmaster gives a great quality cut while striping up the outfield in both north/south and east/west directions. The north - south direction is usually cut at end of the week or only hours prior to Saturday's match to present prominent stripes, which are visible from the clubhouse at the northern end of the ground. 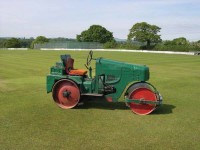 The biggest, and most important, machine in George's shed is the old Benford three wheeled roller which is key in creating Northop Hall's quality wickets. It weighs in at over 1.5 tonnes, and the three wheeled design creates a larger amount of downward force than a modern two wheeled roller, flattening and compacting any pitch into perfect condition.

Two Dennis walk behind cylinder mowers make up the cutting equipment used on the wicket and pitches.

The wicket is cut with a 34" Dennis G860 and is also used to cut the outfield on the odd occasion when the ground is either too wet or when the grass is too long for the Reelmaster. The light weight of the G860, along with its large catcher capacity and attachable seat, allows the outfield to be cut in most conditions without leaving clippings or causing substantial damage to the turf. The only downside is it takes considerably longer to cut the outfield with the G860 compared to the Reelmaster, but its high quality of cut and versatility in most conditions makes the longer cutting time worthwhile.

Individual pitches are cut with a 20" Dennis FT510 walk behind mower. This machine rivals the old Benford roller in terms of importance due to its versatile, interchangeable cassette design, allowing the club to possess a brush and scarifier, as well as a walk behind mower. The machine gives a great cut each time, and operating is simple, allowing a part time groundsman to use the machine with ease. This is of great importance whilst George is away getting some well earned rest at his yearly holiday destination of Tenerife (okay for some).

The FT comes out of the shed approximately four days a week, with the match pitch cut 4-5 times, and the following week's pitch 2-3 times. The brush and scarifier cassette heads are used when too much grass is left on the pitch after cutting. In this situation the scarifier runs over the pitch until the desired amount of grass is removed, then the brush is applied to collect the deposits from the scarifier and remove any loose strains of grass. The pitch is then cut again to even out the surface.

When the weather is wet and the wicket is moist, Dog Lichen (Peltigera canina) becomes apparent and, at times, prolific, especially when heavy rain occurs at the start of the cricket season. The greyish-black scales (thallus) never have caused major problems for George, due to its ease of removal with a hardy broom or scarifier. As the season progresses the wet weather becomes less common and the lichen dies off, no longer causing a problem.

Fairy Ring is also apparent in the outfield, especially when conditions are dry later in the season. Three large rings are present on the boundaries of the outfield where dead or dying grass within the rings are visible but, due to their location, these rings never become a major issue. Smaller rings are present around the ground and even on the wicket itself, but these do not have dead zones to impact the playing surface.

These smaller infections only create a visible section of luxuriant grass, where excessive nutrients are released as the fungus decomposes organic debris. Control of the fungus is very difficult and most of the time impractical, therefore masking fungus where possible with an adequate fertiliser application, is the most viable option for George. When the fungus becomes developed, dead sections of grass are apparent due to high concentration thread-like structures (mycelia), which prevent water movement, weakening or killing the grass. 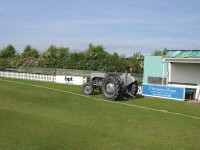 The only possible options to treat the fungus are chemicals (most of which are very expensive), soil fumigation and total replacement of the infected turf and soil, all of which have no guarantee of success. George is yet to treat the three rings on the outfield boundary but, if the dead areas of grass within the fungus, start to become an issue, total removal of the infected turf and soil would be the most realistic option in terms of cost and success.

At the end of the cricket season, in mid September, renovations begin on the wicket. The whole wicket is slit and spiked with a walk behind aerator which has seen much better days, but year after year it keeps enduring each renovation whilst producing good results. The wicket is slit twice, once in the north/south direction and once in the east/west direction. Slitting aerates and softens the surface of the wicket, as well as providing a good profile for seed germination.

Spiking of the wicket is also done twice, again in the north/ south and east/ west directions. The wicket is spiked to aerate deeper into the profile to encourage root growth by providing greater levels of oxygen, whilst promoting seed germination. It is then mown to clean up the surface, before applying a rye and fescue seed mix and a general granular fertiliser to promote growth. These are hand sown over the entire area with the fertiliser applied using a simple spreader.

Loam is then evenly applied and distributed over the surface, with approximately eight bags of loam used for each individual pitch. Renovations usually take around a week working part time, and at the mature age of 75, George needs all the help he can get from club members volunteering to help out. 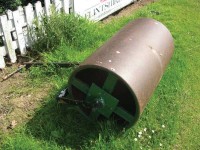 On a personal note I had one of the most successful seasons of my cricket career, which had a lot to do with the high quality surfaces I played on, especially at Northop Hall.

The ground was rated second best in terms of quality in the competition, behind Colwyn Bay Cricket Club, one of Glamorgan CCC's out grounds. This was a great tribute to the work of George and the club, capping off a fantastic season.

Northop Hall Cricket Club is not an overly wealthy club in terms of money, and its volunteers, such as George, are the life blood of the club season after season. They are a great bunch of people and it was a privilege to both work and play there.