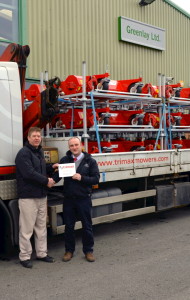 Among the local authorities that have taken delivery of multiple units of the UK-manufactured mower deck are Northumberland County Council, North Tyneside Council and Gateshead Council. A single FlailDek FX unit was supplied also by Greenlay to IDM Landscaping, based in Newcastle-upon-Tyne.

Fitted to specified ride-on front mowers in place of the standard rotary cutter deck, the FlailDek FX was the first Trimax mower to enter manufacture in the United Kingdom.
Commencing in early 2012, the move demonstrates the importance of the UK and wider European markets to Trimax, which has been designing and manufacturing professional tractor-mounted mowing equipment in New Zealand since the early 1980s, exporting its machines world-wide.

Speaking following the presentation, Greenlay's Eric Pattinson noted that the firm had secured a similar award in 2011 for achieving outstanding sales of Trimax Pegasus wide-area roller mowers to local authorities.

"We are very pleased to have won these two major accolades in consecutive years," commented Eric. "Trimax makes superb mowing equipment, backed by first-class dealer and customer support, highlighted by strong levels of repeat business and the outstanding value of pre-owned Trimax mowers. The company not only listens and reacts to customers' comments but has the confidence to back its machines with a comprehensive three-year warranty. We are delighted to be a Trimax dealer."