Carrow Road football stadium, the home of Norwich City, was opened in 1935 after 'The Canaries' flew 'The Nest', their fittingly named previous ground. It became their third ground since the club's formation in 1902. The current stadium consists of four stands - The 'Barclay' and 'Norwich and Peterborough' (aka The River End) which lie behind the goals, and the 'Geoffrey Watling' and 'Jarrold' (aka The South Stand) along the touch lines. The current crowd capacity is 26,018. 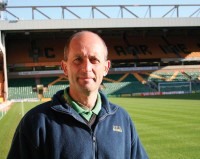 Like most modern stadiums the stands create shade problems on the pitch, particularly during the winter months when the sun is low in the sky. When I caught up with Head Groundsman, Gary Kemp, at the end of October the extent of the problem was immediately evident with well over two thirds of the pitch lying in shade throughout the day. Soil temperatures vary by up to four degrees between the shaded and non-shaded areas and frost will, therefore, take longer to disappear from these areas.

With the construction of a new Desso pitch in 2004 the problem has lessened because the total sand rootzone warms up quicker than the old soil based pitch. At the same time an under soil heating system was fitted which is used as and an when required. It is usually put on before matches when a very heavy frost is forecast but, with a running cost of £1700 per day, it is used sparingly.

Gary has been with the club for twenty years starting at the training ground. Eight years ago he was appointed Head Groundsman overseeing a staff of four.

Russell Allison is Gary's assistant at the stadium - his father was previously Head Groundsman at Carrow Road for forty years.

The Stadium Pitch
The Desso pitch was installed for Nowich City's return ito the Premiership. It has 3% of artificial fibres sown into the pitch playing area using 20,000,000 stiches. These fibres help to stabilise the pitch and reduce the amount of divot repairs required after matches.

Hewitts installed the pitch that comprises a gravel drainage raft overlaid with an under soil heating system and 300mm deep sand rootzone. The pitch was then oversown with an Advanta MM60 ryegrass blended seed.

It has a seventeen head, fully automated, pop up watering sytem that is fed from a borehole, with the option to extract seventy cubic metres a day, not that Gary ever requires that much! Whilst it is important to keep the sand based pitch watered, the frequency of use is driven by the weather. Watering helps to maintain plant health, pitch stability and provides the required playing surface for the players.

The pitch has an old Redgra, all weather, surround which, whilst providing an adequate run off area, does require extra labour time to keep clean and tidy and free from contamination. In addition Gary has to be careful when using a weedkiller as people and machinery moving across it could easily transfer the chemical onto the playing surface, especially in wet conditions.

Gary would like to see it replaced with either a new artificial grass product or, better still, a wet pore rubber infill. This would allow him to utilise the area for turning mowers when cutting the pitch. At the moment Gary has to use boards to avoid wear and contamination on the pitch.

Match preparation begins immediately after the last game has finished. Divoting is ongoing after training and warm up routines, half time and at the end of the match. 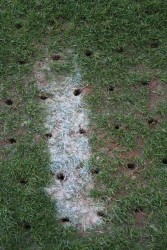 Aeration - A bi-monthly programme of solid tine spiking, using a John Deere ProCore, is carried out at both the training ground and stadium - 100mm deep at 50mm centres. This is followed by a monthly vertidraining of all the pitches. Gary will only ever goes to a maximum depth of 125mm on the Desso Pitch.

Spraying - Pest and fungicide spraying is kept to a minimum, usually only spraying for leaf spot and fusarium. Gary rarely sprays for worms or red thread.

Fertiliser feeds - A granular fertiliser is applied every 2-3 weeks at Carrow Road (Scotts 12:0:9 / 9:7:7) with True Green organic liquids applied between feeds. The same products are used at the training ground but applied more sparingly. Soil analysis is carried out every two months.

A typical week's maintenance at Carrow Road will consist of:
Monday - sweep and collect surface debris, mow and verticut.
Tuesday - mow and aerate.
Wednesday, Thursday, Friday - mow pitch.
Saturday/Match day - mow and mark out using a Rigby Taylor spray jet marker and paint.
The pitch is brushed daily to remove dew and stand up the grass.

End of season renovations
After the season ends there are the usual round of concerts and corporate matches (four a day for four weeks) leaving less than five weeks to get the pitch renovated before the start of the new season.

Gary stresses the importance of completely cleaning out the Desso. This is achieved using a machine designed by John Hewitt that acts like a rotary rake to remove all debris. It usually takes several passes and several lorry loads are removed. Between 60-100 tonnes of new sand are then spread and levelled and the pitch is then vertidrained in two passes before being oversown with Advanta MM60 at a rate of 35g/m2.

Work on the training pitches is dependant on what spare money the club has available. Last year the club managed to spend quite a bit on new drainage on one of the pitches, installing new primary and secondary drainage whilst, at the same time, incorporating some 400 tonnes of sand into the soil profile, vertidraining and overseeding.

The rest of the pitches were hollow cored, spiked and dragmatted to return the cores back into the playing surface. It seems to have worked well. The quality of the pitches I saw during my visit was excellent.

Gary is hoping that, when more money becomes available, he will be able to carry out the same work on the remaining pitches.

The staff also look after two third generation pitches at the training ground, one is quite old and due for refurbishment while the other was installed last year. They are used mainly by the academy sides and juniors.

Even after twenty years at the club Gary is very keen to improve the facilities further. He hopes to undertake some redevelopment work at the training ground bringing into play three new pitches, plus the installation of a footpath for players and parents which would also provide turning areas for his machinery, thereby reducing wear on the playing areas.

Gary is keen on good communication. He believes that building relationships with people, no matter what level they are at, is vitally important. He points out that, when he started at Norwich twenty years ago, there were only ten staff involved with running the club, now there are over one hundred and fifty! In that time Gary has worked with thirteen managers, every one of them different.

During lunch Gary and his staff use the catering facilities at the training ground. It is an opportunity to mix and talk to coaches and players. During my visit Bryan Gunn (a former player and current goalkeeping coach) came and sat with us. He was quick to praise the work of the groundstaff.

Working as a football club groundsman is not an easy job. The pressures of producing quality facilities week in week out, within increasingly tight budgets, is challenging to say the least. The key to improving budgets and, accordingly, facilities, is to get the managers and owners to recognise the importance of the surface the team performs on and the amount of work involved.

From what I saw, at both the training ground and stadium, Gary and his team are very passionate about their work and the facilities they manage. The condition and presentation of the pitches was second to none.