Karl Parry, Head Greenkeeper at Denbigh Golf Club, had the idea for a fairway brush attachment whilst working on Bermuda grass fairways in the States. Here, he charts how he developed his idea and how one British manufacturer has helped him bring it to market.

I've been a greenkeeper since I was sixteen years old, starting my career at Foregolf Chester, moving on to Clays Golf Club, Wrexham for eighteen months and then heading out to the USA on the Ohio State Programme for eighteen months. And this is where I came up with my fairway brush attachment idea.

On my return to the UK, I had a brief spell at Mere Golf and Country club, but soon moved back to my much beloved village of Pantymwyn, where I was employed by Mold Golf Club. It was great to be home and back at the place where I grew up.

I am now the course manager at Denbigh Golf Club, which is just a dream come true.
The brush was invented while I was at Tiburon Golf Club, Southwest Florida, a Greg Norman course where the annual Shark Shootout PGA tournament is held. December's even included eleven 'Ryder Cuppers' in the twenty-four man field.

When maintaining GN-1 Bermuda grass fairways, (Greg Norman 1), we were always battling to control the grain of the Bermuda. We constantly had to verticut, scarify and use groomers on fairway machines to try and control it.

Whilst operating the fairway machines, I always thought there must surely be a way of controlling this grain without using all the extra labour, time and equipment.

I eventually came up with the idea of having an outfront stiff brush in front of each cutting unit that could be adjusted to be as aggressive as the superintendent wanted.

I was able to design and produce a prototype attachment in my spare time and it seemed to work very well. I was keen to get home and see how I could develop my idea further and, hopefully, gain an opportunity to market it and sell it through a distributor in the UK.

However, with no money and little resources it was proving difficult to progress my idea. That was until I returned to Mold Golf Club where my very good friend and new boss, Colin Jones, allowed me to design and develop my brush attachment for our new Toro 5610 fairway machines. To save money, we custom build our own brush units from blocks of wood cut to size, treated and painted, with holes in the bottom for the bristles to be put in.

We used bristles from brooms we bought from B&Q and Homebase. We ripped out the existing bristles and counted them out to be placed into our new brush blocks.
This was very time consuming, but worth the wait. The design worked first time, no problems, and excellent results were achieved.

With the brush system in place, other very beneficial agronomic advantages became apparent:

In essence, this led to better presentation of the fairways, providing an improved canopy for the golf ball to sit upon.

I then went on to design and make a brush system for John Osman Groundcare, specifically design for Jacobsen machines. Each design was based around the same, one system fits all approach. The units require little maintenance and are easy to adjust and fit.

At this time my partner, Elizabeth, was nine months pregnant and was helping me count out thousands of bristles one by one, which was very monotonous. I would like to take this opportunity to thank Elizabeth for all the help and support she gave during a very stressful time for our family.

During the week of production for this Jacobsen brush, our first baby daughter, Ruby Askins-Parry, arrived and I was working into the early hours of each morning finishing off this brush system for John Osman. All was completed on schedule and the recipients, Oswestry Golf Club, seem very happy with them.

I was confident in the product but needed to find a company who could manufacture my design commercially.

By chance I got talking to Richard Legiewicz of Crocodile Golf Products, who I had contacted earlier about supplying us with some of their replacement cylinders and bottom blades. We eventually met up at the Conway Turf Show in April 2010 where Richard explained that the company were already manufacturing a range of drag brushes and other brush attachments and would, therefore, have all the required components available.

An initial visit to their factory in nearby Wolverhampton prompted further meetings to discuss the way forward, which has now resulted in Crocodile manufacturing three brush systems to fit John Deere, Toro and Ransomes Jacobsen fairway and triple mowers. 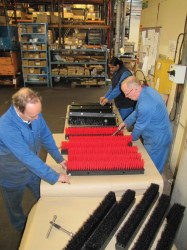 The manufacture of the grooming kits took a significant step forward with the better use of Crocodile's technology engineering skills for both the brushes and the associated fitments.

The back of the brush, as well as the brush bristles, have been manufactured from a high grade, high quality polyethylene, offering increased brush wear and durability as well as a stronger, more robust brush base. The introduction of additional hole-fixings has enabled the brush to be turned around once the leading edge becomes worn, increasing the life of the brush and improving the value of the grooming system. All of the fixings are manufactured from high tensile stainless steel for outdoor corrosion resistance, ease of assembly and ongoing low maintenance.

Based upon a continual development with key greenkeepers and agronomists, we are evaluating different brush patterns, bristle counts and bristle diameters to suit a variety of golf course topographies, as well as the different weather conditions prevailing around the world.

Crocodile Golf is uniquely placed within the turfcare industry to offer engineering solutions to greenkeepers problems, and this is not the first time they have worked closely with a head greenkeeper on advancing ideas. Earlier in 2010, they worked with Rhys Thomas, Head Greenkeeper at South Staffs Golf Club, to re-engineer a range of agronomy tools and hole-cutters.

Further information is available at www.crocodilegolfproducts.com