0 Not so Easy Ryder! 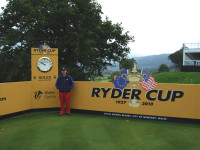 Most of you already know what happened at the 2010 Ryder cup at the Celtic Manor Resort in Wales, but the 130 strong greenstaff had no idea what they were going to be involved in!

Through the connections of IGCEMA, I got to know Patrick 'Cal' Callaby, the workshop manager at Celtic Manor and, in June 2009, I was lucky enough to be invited as a volunteer workshop technician for the 2010 Ryder Cup. Those fifteen months flew by, and it was soon time to brave the crossing of the Welsh border to meet Cal and the team.

I could not believe the huge operation that was underway! After leaving the M4, and finding my way to Coldra Woods Drive, I arrived at the top maintenance facility to be greeted by a very warm welcome.

Once everybody for the 2.00pm induction had arrived, we received our security passes, maps and welcome booklets. We then had the pleasure of meeting Jim Mackenzie, who gave us a rundown of what to expect, before we left to have a look at the course and set up - and 'wow' what a set up!! As we came down the hill, we got our first sight of the structures and set up that Cal had been showing us over the previous few months via IGCEMA's website.

Pictures just don't do it justice; you have to see it in person to realise just how big the site is, and to understand what has been done to the Usk valley.

We were all given the opportunity to have a stroll round the course and tented village to get a feel for the place and get our bearings, before heading back to the maintenance facility to get our uniforms and park up the fast arriving caravan brigade.

With caravans parked and hooked up to the mains, it only left one thing to do - get the fridges full of beer and the barbecues lit. We were then treated to a fantastic feast, courtesy of Famura, and organised by Steve Chappell. Thanks guys, and very well done!!

A few drinks later, and it was time to turn in for the night as 4.00am was looming - the time we had to get up to attend our first practice at getting all 130 of us down to Richardson's farm before 6.00am. With that easy challenge completed, we had a warm drink and pastry before a briefing and job allocation from Jim and his team. At that point, the ten equipment technicians and two product support guys - one from Lely/Toro and the other from Bernhard and Company - left for our briefing with Cal. 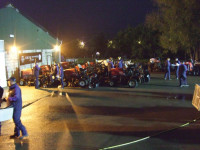 After our first practice day, most days followed the same routine. We were up at 4.30am to be collected by bus for the short drive down to the 2010 course. After a hot drink and briefing, we waited for dawn. At 6.45am, when daylight started to show, all 118 greenkeepers got going on machinery - fourteen semi rough mowers, fourteen fairway mowers, fourteen collar mowers, fourteen tees mowers and fourteen greens mowers. Each pair of mowers had vehicles following behind collecting grass cuttings, and guys switching any mess left behind. Bunkers were trimmed and raked, holes changed and any other item that was out of place was dealt with. Each group of people cutting had a pair of workshop staff with them, in case of breakdown or poor quality of cut. With such a vast amount of people helping, the entire crew were back at the yard by 8.30.

So, what do twelve equipment technicians find to when 118 greenkeepers are out preparing the 2010 Ryder Cup Course? Well, actually, not a lot. Our job, as you know, starts when they all come back in and, believe me, with this amount of people and kit, it doesn't take long before they start making their way back to the yard, all queuing for the wash down pad. So, after breakfast each day, our jobs started. 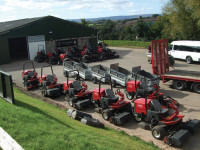 Each day, the twelve workshop technicians checked and reset every mower to be used, after which, anything that was slightly in question was reground to achieve the best possible cut. All the fairway mowers were reground throughout the week, with all the greens mowers being done again Saturday night.

Well, that's what happened until it started to rain! On Wednesday, 15mm fell in four hours and then, on Thursday night, up until Friday lunchtime, 33mm fell. I have never witnessed anything like it. 130 people turned that washout back in to a golf course in a couple of hours to allow play to restart. It was an impressive show of teamwork from people who hadn't known each other just a few days before.

No grinding was carried out Friday evening, as that was spent unblocking pumping equipment, making up hoses and repairing waterlogged machines, a fifteen hour day, but well worth every minute of it. Sir Terry Matthews even came down to the welfare building that evening to thank us all, and said that we had saved the Ryder Cup by getting the matches back on track.

With Saturday being dry it was a normal day of cutting, but with the added job of spreading tonnes of bark chip on all the muddy areas. Little did we know it was the lull before the storm!! 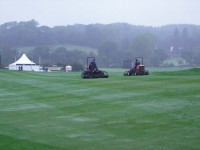 The heavy overnight rainfall on Saturday demolished a lot of the bunkers and, with a multi tee start scheduled to claw back the time lost, the crew had another massive task ahead. Out went the mowers, and the rest of the guys were split into ten teams who, again, performed miracles to bring the course back into play for a second time. By 1.20pm on Sunday play had resumed.

That afternoon, I was able to watch a fair bit of golf and had the pleasure of watching the last match of the day. Standing inside the ropes on the 18th green, next to Chris Evans who was reporting for BBC 5live, and only a few feet from Monty and the majority of both teams, is something I will never forget. 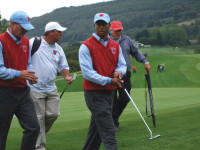 Unfortunately, I missed out on the final day as I was returning home. I have many fond memories of the whole event and made many new friends. This was a truly international event with volunteers from all over the world.

The greenkeepers and relevant departments did an excellent job, with enthusiasm and dedication to achieve the end goal and European golf's finest hour! It was a privilege and honour to be involved in such a spectacular tournament and represent my club, John O'Gaunt, at the Ryder Cup.

I would like to thank my club, Cal Callaby, Jim McKenzie, and everybody else involved, for making it possible for me to attend the Ryder Cup and, in testament to that, I have been invited to help at the Wales Open in May.