0 Not stumped for ideas at North Foreland GC I started my greenkeeping career in 1994, in my homeland of Ireland, at Fota Island Golf Club in Cork, working under Steve Byrne, now of The Wisley. From there, I moved to do the grow-in of The Old Head of Kinsale, County Cork, before finally landing on these shores to do another grow-in at Kings Hill Golf Club in Kent, working under Duncan Kelso, and where I became Head Greenkeeper in 2001. These workplace experiences have led me to where I am today and to all my turf, land and environmental management beliefs and programmes; and, for that, I am very grateful.

In 2005, I took up my current position of Course Manager at North Foreland Golf Club on the north-east Kent coastline. North Foreland is a cliff top chalkland course where the wind and firm conditions are a true test of golf. The site is a classic piece of chalkland with native grasses (fescues) and free draining soils. The chalk allows for play 365 days of the year, with not a single drainage pipe on the course! The long, wispy Fescue rough sways in the sea breeze making it a sight to behold, whilst creating valuable habitat for flora and fauna, along with giving aesthetic appeal and definition.

I firmly believe that both golf and nature can work together for all parties to benefit.

When I arrived at North Foreland, the site had large unmanaged areas which had been untouched for many decades, resulting in a haven for scrub and general encroachment from trees, especially the less desirable species. These areas needed addressing and so the team set up and implemented an Environmental Policy and annual programmes of work. The first objective was to eradicate the dense ground ivy that had taken hold and formed a vast blanket over fifteen hectares. Intensive scarification, using a flail, commenced with all cuttings being removed. The native grasses then started to colonise these areas again as the seed bed bank was opened up to the light and air. Annual scarifying and collection continued for three years, before being relaxed to a three to five year rotational autumn treatment on the various plots.

The results have been immense with not only native grasses returning, but flora populations increasing every year. Man Orchids, Pyramid Orchids, Kidney Vetch and Scabious have all flourished, with the first recording of Lizard Orchids on the site, in 2010, being particularly exciting.

The south-east corner of England is renowned for being the driest part of the country and, therefore, we needed to be proactive in regard to the valuable resource of water. Drawing off the mains for many years, with bills mounting and being at the mercy of the water board, the club decided to take action. 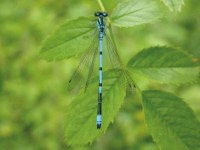 A plan was drawn up for the construction of a reservoir and a bore hole to be dug on site. The addition of these two invaluable pieces in the jigsaw has allowed the course to be self sufficient with its irrigation requirements. Not only that but, what was once a 'dumping ground', is now a haven for an abundance of aquatic life. The water's surface is alive in the summer months with Black Tailed Skimmers, Small Red Eyed Damselflies, Red Vein Darters and many more. This is yet another classic example of how both the game of golf and environment can work together.

The opportunity to manage our own irrigation needs has seen the programme of wetting agent application increase two fold - along with the budget! Yet, the expense is easily justified, as the savings on irrigation water and labour far exceeds it. What is more, the playing surface quality excels with better rooting and an improved soil profile. The wetting agent prevents run off and makes sure the target areas retain any moisture, thereby limiting any wastage and reducing the strain on our resources. We are also involved with Syngenta's Operation Pollinator initiative aimed at halting the decline of our native bumblebees and other crucial pollinating insects.

We've established areas of pollen and nectar rich wildflower habitat that will provide essential food resources and nesting habitat for pollinators.
Pollinating bees are an essential part of the natural ecosystem, both for pollination of food crops and to maintain ecological biodiversity.

Bumblebee numbers have declined over recent years due to loss of habitat, with some UK species now on the verge of extinction, and I believe golf clubs can really make a difference. Independent research trials have shown that even the creation of small areas of dedicated habitat can significantly increase the numbers of pollinating insects.

Obviously, change is not always welcomed by everyone, and the work carried out certainly raised a few eyebrows initially. Communication, as always, is key, but also, by sticking to your good practice beliefs and getting these across to the membership, helped to put out a few fires!

All the work carried out by any turf team needs to be published and communicated to the customers and general public. To help promote the work we have been undertaking, we have had two 'Flora & Fauna' information signs made up at the entrance to the club. These are similar to those you might see in a National Trust park or English Heritage site. They consist of simple text outlining the work carried out, along with colourful photographs to really draw the customer in and hopefully get them as excited as the team.

These, along with us making up Operation Pollinator beer mats for the clubhouse, all help in getting the word out there that golf courses are at the forefront of protecting many of the endangered species in this country.

Yes, we are a business. However, improving the course's environmental and ecological value only further enhances the golfing experience and becomes a selling point of the club.

Getting local organisations on board, such as the Kent Wildlife Trust (KWT), certainly helps to put more confidence into the sceptical public out there. We have been corporate members of the KWT for eight years now and this is something I would recommend to anyone looking to raise their environmental profile within the club/community. We are turf managers first and foremost and we need the expertise of individuals within the environmental/ecology world, so don't be too proud to ask. They have their speciality and we have ours, so let's just work together.

Professionals who say that they don't have the time to carry out environmental work on their site need to have a look at themselves and their time management. How long does it take to make a log pile and, as a result, a valuable habitat for insects? We have all had to fell a dead tree, cross cut it and process it - now you just need to stack it somewhere on site and, bingo, you are on ecology road. It really is that easy, and it doesn't have any major financial implications or drain resources in any way.

Some cost effective ways of increasing the overall ecological value of your site are as simple as erecting a few bird boxes made in-house, holding all green waste - plus any cardboard box deliveries - in an allocated area for composting, which can later be reused for construction projects, laying an old sheet of corrugated iron in a wooded area which will provide an ideal place for snakes to hibernate under, or simply reusing hollow cores for other areas of turf establishment. A lot of us are doing the environmental work from day to day without realising it, but, like everything else, much more can be done without breaking the bank.

When managing a golf course, one has to try to appeal to all of the golfer's senses; plantings and flora grabbing ones' sense of smell, touch and sight; the aesthetic value of the chalkland roughs swaying in the breeze; the sounds of small birds going about their business and, perhaps, an opportunist kestrel patrolling the sky above.

To work in such an environment and play a part in it, is truly magical. The rewards far exceed any workload or daily issues.

The North Foreland Golf Club started out as just a wealthy man's playground filled with gothic 'ruins' and castles but, after the land, which sits on the Kent coast at the point where the English Channel meets the North Sea, was passed between several different landowners, it transformed into the golf club seen today.

Lord Avebury and William Capel Slaughter were responsible for the founding of North Foreland Golf Club back in 1903 and, with Sir Luke Fildes and Clifford Brookes, sat on the first committee of the new club.

Within a few years, thoughts turned to enlarging the course to 18 holes and it was then that the committee looked to another member, Alfred Charles William Harmsworth, later Lord Northcliffe. Harmsworth was the owner of a nearby large estate.

Taking a lease on this additional land gave the course a view of its most outstanding landmark - the North Foreland Lighthouse which has since become the emblem of the club.

North Foreland Golf Club, is an unrivalled chalk downland free draining course offering all-year golf coupled with stunning scenery and breathtaking views of the sea from every tee and green.

In addition to the main course, there is a challenging 18-hole par 3 'Short' course, the Northcliffe, which provides the opportunity for members to hone their short game on holes that vary in distance from 50 to 140 yards. It could be assumed that a course with par-three holes can easily be tackled but, over the years, the Northcliffe course has lulled many players into a false sense of security.