0 Nothing compares to MM seed

Andy Richards, grounds manager at Haileybury - an independent co-educational boarding and day school, insists that grass seed is the first place to start in producing the best possible sports pitches and he believes that nothing compares to Limagrain's MM brand of grass seed. 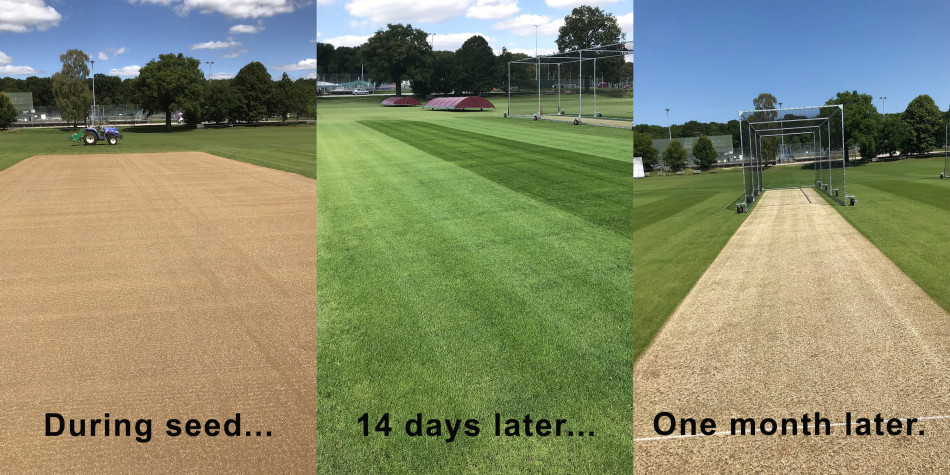 Andy was renowned for producing sports pitches of the highest quality in his previous role at Shrewsbury School and, after recently celebrating his one-year anniversary at Haileybury, he is hoping to raise the bar even further in his new role.

"I introduced Limagrain's MM50 and MM60 seed mixtures at Shrewsbury six years ago and they made a huge difference to the pitches," he said. "I recommended the MM range to so many other schools and clubs across the country from Wales to the South Coast because it is so reliable, and the recovery rate is better than anything I have ever used.

"I'm now using the mixtures here at Haileybury and I'm hoping that, with a bit of time, we can match those highly regarded pitches at Shrewsbury and go one step further - in fact I'm confident that we can better them eventually."

Introducing Limagrain MM seed was one of Andy's first actions when he took the reins at Haileybury and, although he had every faith in the mixtures, it was not plain sailing to start with.

"In the time that I've been here, we have fraise mowed all five cricket squares, taken off 20mm of thatch and organic matter, and re-seeded with Limagrain's MM50. The results were very good; the grass was healthy, they played well, the Director of Cricket was pleased with them and aesthetically they looked brilliant.

"However, there was an underlying issue in the sense that the squares were not constructed correctly to start with. Therefore, we started the process of relaying them from scratch and then reseeded again with MM50. Now we are in a position where we can kick on and improve the squares even more.

"In my mind MM50 is the best seed mix for cricket and fine turf, there is nothing else that can touch it or even compare to it."

This hard-wearing MM50 mix has rapid germination, very fine leaved appearance, high shoot density and is tolerant to very close mowing, along with high disease resistance. All these attributes together produce a fantastic sward that has great colour all year round. It is also widely praised for its excellent and rapid recovery.

When it comes to his winter pitches Andy relies on Limagrain's MM60; a 100% Ryegrass formula which is perfect for renovation and divot repair, has a high disease resistance, fantastic aesthetic qualities and offers extremely fast germination:

"We have overseeded with MM60 on all of the pitches and the grass coverage has improved by around 40% in the 12 months I've been here. It offers fantastic colour and is the perfect mix for rugby and football," said Andy.

With both MM mixtures at his disposal, Andy feels that they allow him to create the best possible sports pitches - something which he believes is a vital ingredient in the private school experience.

''Sport is an important aspect of the school's offer and we want to do everything we can to give the pupils the best surfaces to play on; Limagrain's MM seed will be integral to this''.

"I'm a firm believer in starting with the best seed - grass is what we are all trying to grow and that is what sport is played on. Everything else will fall into place afterwards."

"My advice is to start with the best you can and in my opinion MM seed is the best."

Pitchcare are an appointed distributor of Limagrain seeds . Visit the Pitchcare Shop to view the full range