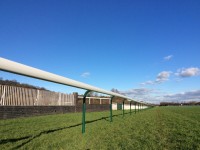 Nottingham Racecourse is situated at Colwick Park, close to the River Trent and about 3 km east of the city centre.

Until 1996, Nottingham was a dual purpose racecourse with a flat jumps track, but with the end of National Hunt racing at the track it allowed Nottingham officials to reconfigure the course and establish two flat tracks, one for the use in the early and late weeks of the season and the other in High Summer as part of its policy to improve ground conditions and entice the very best horses.

In 2014 it was awarded the prestigious Gold Standard by the Racehorse Owners Association in recognition of the upgrading and quality of its facilities.

At the beginning of this year, upgrades were made to the course and Nottingham ordered 8 furlongs of Fornells 10108 Running Rail from Watt Fences to replace their previous running rail. The running rail they ordered consisted of green legs and white rail and the ground staff did the install itself.

The new rail, which will be used for all sprints as the race side rail, was finished by the end of January all in good time for their opening meeting on the 6th April. They also ordered 5m slip rails to enable to the stalls to be taken on and off the track.

Jane Hedley, Clerk of the Course, commented; "We have just put in place our new Fornells running rail, along the entirety of the stands side of our home straight. We are exceptionally happy with the resulting smart, robust railing. We intend to phase in Fornells to replace all of our permanent railing over the next few years."

Fornells Running Rail is made up of three major components: the rail profile, the posts (for holding the rails up) and the ground footing (for fixing the posts to the ground), and is available in Lightweight (10108) and Heavyweight (10100).

Nottingham has 23 fixtures during the season with the last meeting on the 2nd November.