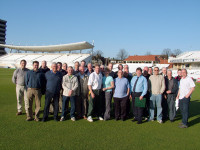 On a recent trip to Nottingham I had the pleasure to meet up with a number of dedicated groundsmen who were attending the Nottinghamshire Cricket Groundsman Association ( NCGA) Annual General Meeting at Trent Bridge.

Well over 25 groundsmen turned up for the meeting which was preceded by a presentation by David Goodjohn from GSB loams who gave a talk on the benefits of taking and conducting Motty tests, a simple method for measuring clay loam strength.

It was surprising to hear that very few groundsmen had or were conducting Motty tests on there clay soils.

The chairman, Stuart Burrows (Nottinghamshire CCC Cricket Development manager), thanked everybody for their attendance and spoke highly about the commitment the members had shown in supporting the Association in the previous twelve months.

The Association was formed in 2003 and now has 50 members who attend four meetings a year to discuss issues relating to grounds maintenance. The objectives and aims of the Association are to raise the profile and awareness of the work involved in the preparation and maintenance of cricket facilities in the County.

The Association always meet at the Trent Bridge County Ground as this is a central location for most clubs in the County with the added benefit that Steve Birks, the Head Groundsman at Trent Bridge, often helps out and presents some workshops at the ground. The workshops have covered issues of maintaining and repairing pitches during games and end of season renovations.

Membership to the Association cost £10 per year and £2 for U21 year olds, the money is then used to promote educational activities for the membership.

I spoke to a number of the groundsmen at the meeting who were very pleased with the support they were getting from the Association and felt it important to have the opportunity to meet up and share problems with one another during the season.