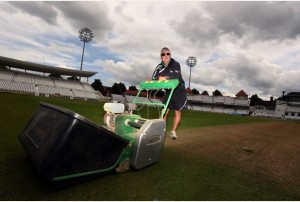 Nottinghamshire's groundstaff have been praised for their outstanding recent work by Mick Newell.

The director of cricket joked head groundsman Steve Birks and his team have been forced out of their shed this summer by the unseasonal amount of rain.

Steve ensured the most recent game against Worcestershire Rapids was only delayed by 15 minutes after a Saturday morning deluge hit Trent Bridge.

They also put in a sterling effort to try to get the game on against Durham the previous week, only to be thwarted by a storm which saw it abandoned.

"Saturday morning was dreadful so to start 15 minutes late was an amazing achievement by the groundstaff," said Newell.

"We were keen to get out there and it was perfectly playable. In a good summer they sit in a shed and play darts, or work on their sun tans outside!

"Over the last few weeks they've earned their money.

"They've not just got us on the field, but they've produced pretty good pitches. Steve is a fantastic groundsman and he's got a great staff."