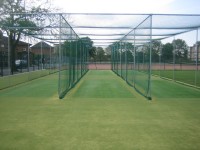 A top Manchester cricket club has taken its training and coaching facilities to a whole new level - with the expert help of world-leading synthetic surfacing specialist Notts Sport Cricket.

A new ECB-approved triple bay practice facility has been installed at Urmston Cricket Club in Greater Manchester, meaning players can now make the most of top-class training facilities for the first time.

Previously, they had to make do with a single portable cage which was wheeled out on to the club's main pitch when needed - but, due to regular use of the ground for matches, could only really be used by Urmston's first team players for once-weekly practice sessions.

Construction of the new triple-bay facility now means that both senior and junior sides now have the time and space to hone their skills as often as they like.
Club chairman Rob Arnold says: "A single mobile net is not enough for a club of our size, and we have been looking for a solution that would allow us to practice much more frequently and give us the opportunity to roll out a proper structured coaching programme.

"The new facility has made a massive difference and we're delighted not just with the quality of the pitches, but with the professional service we received from Notts Sport Cricket from start to finish."

It was purely by chance that Urmston Cricket Club and Notts Sport Cricket struck up their successful partnership, after Regional Sales Manager Lee Jacques got chatting to a taxi driver who happened to be the father of an Urmston player.

With six senior sides and six junior sides playing at The UCG, the club wanted to ensure that the new facility would cater for a wide range of ages and abilities - and Notts Sport Cricket recommended a bespoke solution that was ideal for its needs.

Shaun Patrick, Chairman of Notts Sport, says: "The fact that Urmston Cricket Club can now offer its players so much more in terms of training and coaching shows just what a big difference having high-quality facilities can make.

"Whatever the needs of a club, Notts Sport Cricket can provide a tailor-made solution to help take the development of players to the next level."