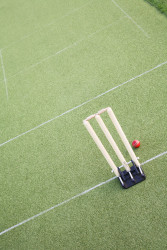 Cricket has undergone a revolution in Germany over the past ten years - helped in no small part by the world's leading supplier of synthetic cricket surfacing systems, Notts Sport.

Since then, the artificial turf pitch at Bonn Cricket Ground has withstood ten years of heavy use by the five cricket clubs based there - with games every weekend and practice sessions every summer evening.

Bonn has become the focal point for cricket within the region, with other clubs in the area such as Koln, Dusseldorf and Bochum installing their own artificial turf pitches.

So it was no surprise that when the pitch at Bonn needed refurbishing due to wear and tear, the German Cricket Federation and North-Rhine Westfalia Cricket Union were only too happy to ask Notts Sport to supply the new surface - which, thanks to advances in technology, is even better than the first.

Brian Mantle, German Cricket Federation General Manager, explains: "The first pitch supplied by Notts Sport was to revolutionise cricket in North-Rhine Westfalia and led other clubs in the area to do something similar.

"From the origins of Bonn Cricket Club and Bonn Cricket Society, the former German capital has developed into a kind of cricketing capital, certainly within North-Rhine Westfalia.

"Bonn Cricket Ground is home to five clubs who utilise the facilities every Saturday, Sunday and public holiday to play every game possible, and every summer evening sees one of these clubs practising on the pitch. It was therefore no surprise when the pitch started to get a bit bare in patches.

"We are delighted with the new pitch supplied by Notts Sport and we hope it will bring as much fun and pleasure to the region's cricketers as the last one did."

The refurbishment was funded by the German Cricket Federation, North-Rhine Westfalia Cricket Union and the five Bonn clubs.

They chose the premium NG12 carpet, a tough, hard-wearing and proven design, which was laid by Bonn cricketers under the supervision of German Cricket Federation Sports Director Indrajith Fernando.

Shaun Patrick, chairman of Notts Sport, said: "Notts Sport is a big backer of the grassroots game and a partner to ICC Europe, and so it is a real delight to be part of the success story which cricket has become in Germany over the past ten years.

"It's fantastic to have helped provide a facility which has brought so many new players to the game and will continue to offer great opportunities for cricket players in Bonn and the surrounding region for years to come."

Notts Sport, which has 27 years' experience in the synthetic sports and play surfacing industry, is the world's leading supplier of non-turf cricket pitch systems for coaching, practice and match play.

The company offers a choice of seven artificial pitches - including the NottsBase D System and Envelope System, which can be designed and installed as matchplay or practice facilities - plus bespoke systems and a range of portable training mats for indoor and outdoor use.