Steve certainly knows what he's talking about when it comes to artificial playing surfaces, having experienced a good many during a long and distinguished career - including the famous 'plastic pitches' at Queens Park Rangers and Luton Town in the 1980s.

And he says the Notts Sport-designed pitches at Lutterworth and Fleckney are among the finest he and his teammate-turned-business partner have encountered.

"They're absolutely fantastic facilities and the Lutterworth pitch in particular is one of the best we've ever come across - almost like real grass to play on," Steve says.

"Looking back on my career when I played on the artificial pitches at QPR and Luton, it's unbelievable how synthetic playing surfaces have advanced.

"If Notts Sport pitches had been around when I was playing, maybe my knees wouldn't be knackered today!" 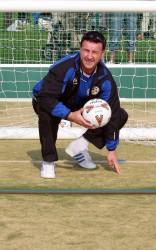 The Steve Walsh and Muzzy Izzet Soccer Academy provides expert coaching for as many as 50 talented youngsters during its weekly sessions at Lutterworth.

And Steve says that it is during the winter months that Notts Sport's 3rd Generation football specific artificial pitches really come into their own.

He says: "It's nice to have a facility that can withstand the extremes of the British weather and that you can play on all year round, because grass can become unplayable during the winter.

"The durability and quality of the Notts Sport surfaces means we can get the best out of the kids and develop their footballing talents."

The renowned multi sport VHAF NottsSward synthetic turf surface used at Fleckney was laid on to specialist base layers to provide a facility that offers consistent playing performance for a range of sports including tennis, hockey, football and netball.

The made-to-measure facilities at Lutterworth and Fleckney were each installed by Leicester-based Dura Sport following a formal tender process completed by Notts Sport as part of the unique free Design and Advisory Service that offers customers a complete design and project management service from the earliest development stages to the final delivery and handover.

Indeed, over a two year development period, Fleckney Parish Council was able to use the Design and Advisory Service offered by Notts Sport to assist with planning and funding which was crucial to the scheme being successful as the council could not afford to incur any development costs. In addition, the council also enjoyed the full range of free project-management services that Notts Sport completes as part of any overall scheme and contract.

To find out more about the Steve Walsh and Muzzy Izzet Soccer Academy, visit www.futurefoxes.com