by James Brierley
in Consultancy
on 11 Jun 2014 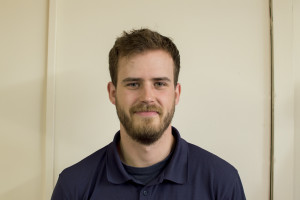 What do those three numbers mean?

It is a question I am asked on an almost daily basis by customers. Those three little numbers printed on the front of your bag of fertiliser, or side of the bottle, will make a huge difference in how your sward will react, given a number of variables. The three numbers signify the percentage content, in order, of Nitrogen, Phosphorous and Potassium of the fertiliser product.

I must point out that not all fertilisers have an NPK ratio, as there are other forms of fertiliser available (e.g. a straight, trace element fertiliser). However, many do have this ratio as they are the three major nutrients that promote growth and general health within a plant. For this reason, these three nutrients are generally termed macronutrients, whereas other components such as zinc, boron, molybdenum etc. are generally termed micronutrients or trace elements.

What does each of these nutrients do? 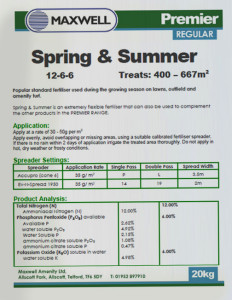 Essential in the building of DNA in a grass plant as it is a base element of most amino acids, and therefore hugely important in cell replication and growth.

Figure 1.left Example of how the NPK ratio is shown on a bag of granular fertiliser

The building block of energy within a plant. Adenosine triphosphate (ATP) contains three phosphate elements and is the molecule from which plants produce energy from the process known as photosynthesis.

Seen as the element that allows the plant to recover from major stress events. In periods of drought, for example, it allows easier absorption of available moisture and aids the translocation of this moisture throughout the plant. It is also a major constituent of most plant cells,and aids in the building up of carbohydrate stores as we head from autumn into a cold winter period.


What forms of these nutrients are used in fertilisers?

Nitrogen comes in many different forms, and in the agricultural industry in particular this is a major cause of argument of which is the best/most efficient form. At its simplest, the main two forms of nitrogen in use are ammonium and urea. Both of these have advantages and disadvantages with regards to their application, and will affect growth in slightly different ways. 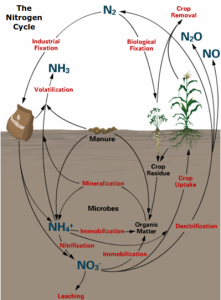 A major advantage of using ammonium-based nitrogen is that some of the constituent is almost instantly available to the plant. As the cycle below shows, nitrogen effectively has to be broken down into nitrate (NO3-) form before uptake by the plant (it can take up ammonium ions too (NH4+)).

Therefore, ammonium nitrate fertilisers have a percentage of its make-up that is readily digestible by the plant. Disadvantages include an ability to turn the top horizons of the soil slightly more acidic than deeper soil horizons, and a propensity to become leached/lost to the atmosphere easily.

This leaching effect is due to the fact that nitrates are naturally negatively charged, as are soil particles, and so they are not held within the soil easily, particularly during periods of high precipitation.

Urea, on the other hand, will need to go through at least one stage of bacterial digestion before it is produced in a usable form (nitrate). It also suffers in that it can be easily volatilised to the atmosphere. Volatilisation is a process whereby urea particles are nitrified by bacteria into atmospheric ammonia particles. Losses of this nature are accelerated by warm, moist soils, high pH, and surface organic matter. Urea fertilisers are generally less volatile on heavier soils (clays) that possess a high cation exchange capacity (CEC).

Phosphorous is generally supplied in a form known as phosphate (P2O5), delivered in a form known as anhydrous phosphoric acid, which is required for plant uptake. There are some fertilisers that provide straight phosphite (P2O4). These products have a very different objective to traditional fertilisers containing phosphate, being supplied to help fight against stress events and reduce disease incidence. Providing the plant with phosphite bypasses the energy-consuming process of nutrient uptake, allowing the plant to utilise the nutrient quicker. This is due to its relative solubility in soil in comparison to phosphate. This goes to show what a large difference such small variations in chemistry can create.

Potassium is generally provided in a form widely known as potash - generally in the forms of potassium chloride (KCl) or potassium sulphate (K2SO4).

How does the plant take up this nutrition and how does this affect how we should apply fertiliser?

Turf plants take up all nutrition as anions or cations (molecules with positive or negative charge). 80% of this nutrition is taken up at the intersection of the stem and roots, or 'crown' of the root system. Therefore, throughout most of the growing season we will need to aim to provide a balance of anions and cations to the plant which is taken up easily by the root system.

The balance of this make up will generally depend on the time of year. Throughout the winter period, most groundsmen/greenkeepers should not be thinking about applying large quantities of the three macronutrients. As we enter spring, and soil temperatures warm up, we will need to start thinking about putting down a comparatively large amount of nitrogen, with a balance of potassium, to kick-start growth. What type of nitrogen we put down is a bit more problematic as there are advantages and disadvantages of using both main forms. Similarly, specific NPK ratios at this point are difficult to recommend in a wholesale manner, but a typical spring/summer fertiliser could have a make-up such as 14-2-7 or 12-6-6 , for example.

Essentially, the advantages of using ammoniacal nitrogen are a lowered soil pH which can increase the uptake of micronutrients via increased availability. The disadvantages include increased oxygen requirement of roots, competition with potassium and reduced root growth, amongst others.

On the other hand, applying nitrate nitrogen can cause increased root growth, a reduced oxygen demand and less energy for uptake. However, it can cause elevated topsoil pH and may cause a need to increase the use of chelated products to aid uptake. Therefore, often there needs to be much thought about which type of fertilisers to use to balance inputs, but often a nitrate fertiliser is used to provide a quick turf response as soil temperatures start to rise.

As we move through the summer, a grass sward will (generally) follow a growth curve such as the one in figure 3. As it shows, there is generally peak growth as we reach May/June, which is traditionally due to warm weather and plenty of available moisture. This is known as a 'spring flush', and is often seen as the time of year where increased grass growth should be supplemented with increased nitrogen (maybe excluding the past five years or so!)

Figure 3. A generalisation of grass growth throughout the year

At this point, the aim should be to essentially 'drip feed' the sward, so as not to create unwanted, accelerated growth. At this point of the year, many greenkeepers/groundsmen think about utilising growth regulators in conjunction with their feeding programme to reduce top growth and increase root density. The key is not to provide too much available nitrogen to promote a steady rate of growth.

As we move through periods of summer stress (drought) we should be thinking of utilising a better ratio of N:K. Potassium will play a major role in the plant in these periods, by affecting chemical and moisture transfer through the root system, as well as allowing better stomatal control by the individual plant. If potassium is inadequate, the level of metabolic activity will also reduce as enzyme structure can become markedly changed. This is an unwanted scenario during a period of stress.

As we move into the autumn, we should be planning to provide the plant with fertilisers containing higher phosphorous and potassium levels than nitrogen. As growth and cell replications reduce, the amount of nitrogen utilised to replicate DNA is required less. However, the plant will be preparing to generate carbohydrate stores for a long winter with low photosynthetic rates. Higher comparative percentages of phosphorous and potassium will give the plant a better chance to do this. Typically, a late autumn fertiliser could have an NPK ratio of 3-3-12 or 3-6-8, for example.

As mentioned previously, as winter approaches, the amounts of NPK heavy fertilisers should generally be reduced. During these periods, products such as soluble iron or some biostimulants can be used to increase colour and general plant health throughout a traditionally difficult period for management.

The need to understand NPK ratios is a basic tool for any aspiring or, for that matter, established greenkeeper. Once understanding how this works, we can make more educated decisions about how best to maintain our playing surfaces. Ensuring you have taken at least one (but preferably two) soil sample per year will allow you to gauge how your decisions have impacted the nutrient balance in the rootzone over the growing season/calendar year.

It is hoped that this article provides an insight into why we do the things that we do, but under no circumstance should we become solely 'NPK focused'. Understanding the macronutrient balance and the plant's needs allows us to develop our understanding and provide a better overall sward. It is therefore a stepping stone in understanding trace elements and other products that can alter soil conditions for the benefit of your playing surface.