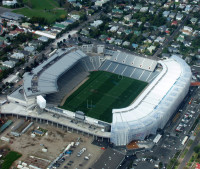 No more waiting, the Rugby World Cup (RWC) is finally here! The RWC is established as the third biggest sporting event in the world behind the Olympic Games and FIFA World Cup, making it a truly worldwide occasion and a festival of Rugby.

With television audiences of over 4 billion people and attendances in the millions, it's a carnival marked on every rugby fan's calendar around the world. The 2011 World Cup sees world rugby power house, New Zealand, as the sole host for the first time, giving the country a great chance to showcase some of the magnificent stadiums the nation has to offer.

With the world's media spotlight firmly focused on New Zealand and its stadiums, it gives the country's elite curators and their grounds teams a chance to excel on a grand scale. You can bet every piece of turf has been groomed and is awaiting its chance to shine!

Eden Park is New Zealand's largest stadium and the country's Wembley or MCG . The stadium has a rich sporting history dating back to 1900 but this year's RWC will arguably be Eden Park's biggest occasion yet. Mark Perham is the man in charge of the nation's most famous patch of turf and his team have made sure no blade of grass is left uncut in preparations for its heavy workload.

With a 256 million dollar redevelopment being completed in 2010, which brought it to a permanent capacity of 50,000 and an extra 10,000 capacity added on especially for the RWC, the ground is raring to go. It's also the only stadium in the world to host two RWC finals after it held the inaugural final in 1987.

Mark Perham has only had 18 days between the last match at the ground and the opening ceremony. Unlike the soccer World Cup when grounds weren't played on for three months before hand! The rye grass has been lovingly groomed by seven staff, seven days a week, and sparing abysmal weather, the pitch will be impeccable condition throughout the tournament.

Mark said "We just hope it's reasonably dry. We're above average rainfall for this year already, so it would be nice if it flattens out a bit." New lights have been installed which encourage grass growth in the shaded area of the ground. Machinery is all but banned from driving over the turf. Perham said the biggest pressure on his turf is the pre-tournament events. "The opening ceremony will probably put more wear on the ground than the entire tournament."

The 1.6 hectare patch of turf is seeded with Centurion Rye grass for all year usage. It is able to drain up to 75mm of rain per hour so it will handle any conditions NZ can throw at it during its 11 game schedule. The ground has a Motz stabilized turf system and has a StrathAyr portable sand tray for use in the rugby season and a portable wicket tray for the cricket season. The irrigation system is a Rainbird site control system with 98 sprinklerseach with individual head control.

Wellington's premier stadium and one of Oceania's supreme multipurpose grounds, hosts cricket, rugby, football to name just a few sports on a regular basis. The experienced Brett Sipthorpe heads up the grounds team. Brett started out in the industry with an apprenticeship at Melbourne's elite Wesley College in Melbourne. Brett's been at Westpac since 2006, so knows how to get the ground up for big events.

The relatively new stadium that was built in 2000 had over 7,930 tonnes of sand used during construction of the pitch and 2,800 tonnes of drainage gravel. 900 kilograms of grass seed was used with three different types of grass seed, two rye grass and one creeping fescue. The famous turf is mowed daily at between 20-25mm depending on condition. There are also 56 pop-up sprinklers in the pitch. 
Situated in Albany in North Shore City and opened in 1997 after nearly a decade of discussion, planning and construction. Normally with a capacity of 25,000, but increased for the RWC with temporary seating taking it up to 30,000.

The stadium is set within 24-hectares of grounds with five fields adjacent to the main stadium keeping the grounds team busy all year round; the stadium was designed with rugby codes in mind to ensure fans enjoy the best possible view of the action. 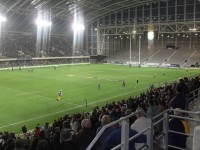 Much has been written and said about Forsyth Barr and for good reason. The stadium opened its doors last month in August to much fanfare and acclaim; 'The most modern stadium in the world' and 'The best viewing in NZ'.

Opened, on time and on budget a rarity this day and age, Dunedin's new hi-tech indoor stadium cost $190 million and was completed in two years. It is the world's first fully enclosed grassed stadium! Coryn Huddy has made the trip down the road from the now defunct Carisbrook, bringing local knowledge and plenty of experience.

Coryn has been behind all of the testing and growing of the new turf and has been pleased to prove doubters wrong who said growing grass inside was impossible. Huddy tested the new grass system under the ethylene tetrafluoroethylene material in test plots in the Carisbrook car park, so always had faith. He said that had been a huge advantage for the stadium. "I don't know anywhere else which has had that length of time to prepare its turf in real life and find out what is best for the ground".

Forsyth Barr is also the first stadium in Australasia to use Desso Grass Master which is installed by a computer controlled machine with bobbins of artificial grass, injecting artificial fibres 20cm deep into the soil, every 2cm across the pitch. This results in approximately 20 million artificial grass fibres, which equates to enough fibre to stretch one and a half times around the world! During the growing process, the roots of the natural grass interlink with the synthetic grass fibres as they grow deeper into the ground, anchoring the turf into a stable and even field. And although 3% of the pitch is made up of the synthetic grass fibres, Desso Grass Master gives players the feeling of playing on a 100% natural grass pitch.

Karl Johnson (KJ) has Hamilton's premier venue in great shape and his team is excited by the challenge. The pitch was replaced at Waikato Stadium for the first time in nine years due to the tight specs of RWC in 2011. Karl explains the turf was replaced with a Motz TS III system. Colosseum Ryegrass is used due to its year round performance ability.

A Rainbird irrigation system is used at Waikato Stadium with a standard control system. The stadium is cut at a height at 30mm. KJ told the Waikato Times his team had been using a hi-tech "growth blanket" to encourage grass growth so the surface would meet the stringent RWC playing field standards. Recent weather had made ground preparations challenging, he said, but Johnson wasn't anticipating problems for the three matches in Hamilton.

KJ said "In the days leading up to the RWC matches, there are strict protocols my team and I have to follow - mainly adjusting the actual playing field size, RWC-specific mowing patterns, and even the length of the grass."

The grand old stadium was originally built in 1911 as is known to be the best in the country. That's a huge compliment for Phil and the team. The ground was dug up and resown especially for the RWC and it's left Wilkie rapt! "I never envisaged a surface like this after we dug it up two years ago. I was nervous because trying to grow grass on sand, it is really hard. But we did it at the right time of the year and managed to get it to grow and it worked pretty well."
Former All Black Mike Delany is one of many players who gave the field his seal of approval "It's one of the best grounds I've played on. Even when it's wet the ground is still in great condition"

With over 30 years experience behind him, Wilkie said it still made him feel proud to know international players liked playing at the stadium. "It shows me I'm doing my job to the highest standard that I can achieve".

The venue was first developed as a rugby ground in 1931, with the first stadium completed in 1947. Recent enhancements have continued to be added on including the recent expansion completed in 2010 which raised the stadium to the present capacity.

For the past 24 years Bill Read has seen first-hand Taranaki's premier pitch evolve into a facility now rated in the world's top three by New Zealand Rugby World magazine!

Bill was an ex-farmer and thought he knew all about turf when he started but he is the first to admit he has learned a lot through experience. "If something didn't work I'd try something else, I think I've got it pretty right now." Read said the two biggest changes have been the upgrading and building of the two grandstands and replacing the old dirt with a sand carpet base.

Sunny Trafalgar Park is Nelson City's premiere enclosed sports and open-air events centre and Peter and his team have been awarded three great matches for the RWC.

Gray is all about precision with a 10-metre wide mowing pattern and 30mm cut done to RWC specifications. Trafalgar has recently gone through a much published makeover that was a world first as the base was formed from recycled glass sand, but it's gone according to plan. While Peter controlled the new grow in stage, one thing he hasn't been able to control is the weather. "We've all struggled with pretty cold conditions and lack of growth so, I think all groundsmen around the country are all looking to the sky and enjoying some sun."

Northland Events Centre is a brand new multi-function events centre in Whangarei after $18.5m was spent on a redevelopment that was completed in 2011. The improvements included a new stand to to boost the stadium to its current capacity.

Manager John Lynch says preparations are being done every day for the two international games. The stadium is undergoing regular field maintenance, with a lush green rye grass being oversowed on the field. "By the first game it will look nice and green and lush, like a green carpet." 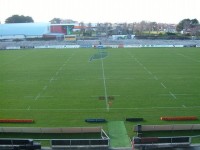 In 2001, the Stadium was redeveloped and the dilapidated South Stand, which was built in 1923, was replaced with brand new facilities.

Russell has had some testing times leading up the RWC with snow fall and bad weather but had said; "The Colosseum ryegrass has stood up beautifully to the weather conditions and come September we will have it a picture". 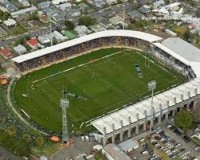 The popular test cricket ground is ready to go for RWC, with the last four years having seen an upgrade to the stadium match lighting and one entire grandstand removed and a new stand built in its place.

Phil is no stranger to the media spotlight with plenty of high profile cricket tests having graced his field, but the RWC will undoubtedly bring a whole new kind of atmosphere and spotlight to the picturesque ground.

Overlooking the stadium's oval, the redeveloped grandstand was completed in March 2005 bringing the ground's capacity to its current capacity.
Nigel Robinson has been busy, he spot-sprayed the usually pristine grass carpet to rid it of poa grass, just for the RWC. Stadium management had to send RWC details of their turf maintenance programme and RWC officials wanted consistency of grass across all fields.

Sand-slitting and other drainage work was also done in April-May at a cost of about $100,000, with the view of a pristine field for the international audience.

Pitchcare Oceania wishes all the grounds, curators and their teams the best of luck for RWC 2011. Let the games begin!