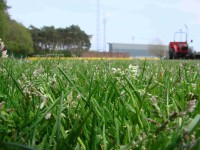 Campey Turf Care Systems have concluded their seven week European Demo Tour, completing their final two full pitch renovations at football clubs in The Netherlands and Belgium to much acclaim. 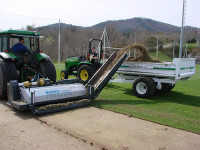 The team began work at Kozzaken Boys' ground in Werkendam last Monday (26th April), stripping the surface with the Koro by Imants Topmaker. This revealed returfed goal mouths suffering from extensive matting and compaction, a problem remedied by the use of the Koro by Imants Cultiroll which relieves surface compaction in heavy wear areas by driving its blades through the surface before levelling it flat again.

Fifty guests, including groundsmen from a number of Eredivisie (top Dutch league) clubs were welcomed to the venue the following day by staff from Campeys and their Dutch distributor, The Verschoor Group. After a brief presentation by their hosts, guests made their way out into the sunshine to receive an explanation of the renovation process they were about to see from Campey Sales Director, Simon Gumbrill aided by Arwin Verschoor and inventor of the Koro range of machinery, Ko Rodenburg. Guests were invited to test the compaction in the soil profile prior to the renovation with the Imants Penetrometer compaction meter, which revealed that it was almost impenetrable past the initial two inches. 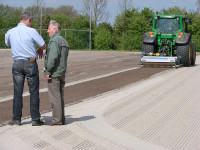 The lack of rainfall in the preceding weeks had left the surface dry and dusty, but the Topmaker stripped off the remainder of the heavily poa-infested surface with ease. One hundred tonnes of sand was then loaded into the Dakota 414 Turf Tender and Raycam Speedresser 24 and spread onto the surface.

The Koro by Imants Recycling Dresser 1900 was then run through the pitch relieving layering and compaction, aerating vertically and horizontally and bringing 60 tonnes of rootzone to the surface where it was ameliorated with the sand and redistributed as dressing. At this point, guests were again invited to use the Penetrometer to gauge the machine's effect on compaction, which had been significantly alleviated after just one pass.

After additional cultivation in the goal mouths with the Cultiroll, the pitches were levelled with the Koro Speed Harrow before being seeded with a high-quality blend of perennial ryegrass and poa pratensis using the Raycam Aeraseeder and Vredo disc seeder. Finally, the pitch was treated with the Imants Shockwave to relieve any compaction from the renovation machinery and to level the surface.

The team headed south on Wednesday, crossing the border into Belgium to their final destination - the home ground of Belgian First Division side KVC Westerlo, situated 30 miles north east of Brussels. 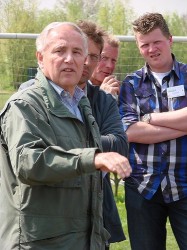 The team's training pitch, adjacent to the main stadium, was approximately 90% poa annua and severely compacted. Prior to the renovation, it proved impossible to push the Penetrometer even a short distance into the surface in some areas, even under the pressure of the operator's full body weight.

Guests and journalists from Belgian trade publications invited by local dealer Van Dyck Marcel arrived to find the TopMaker making good progress in the 26 degree heat. They remained until late in the day, watching each sequence in the renovation process with great interest, stimulating discussions about what they'd observed and sharing their own experiences of pitch renovations.

Upon the team's arrival back at Head Office in Macclesfield on Friday, Managing Director Richard Campey made the following observations about the venues they'd visited: "The six pitches we renovated consisted of approximately 95% poa annua brought about by the excessive use of irrigation and fertilizer and lack of regular mechanical maintenance, something we simply don't see at professional level in the UK.

In addition, each had very poor surface levels, especially in the goal mouths which were heavily worn. All the pitches consisted of rootzone construction to a depth of 18cms, then 12cms and then onto the drainage layers. We encountered severe compaction at the surface then at around 13-15cms, resulting from either a total lack of aeration or always aerating down to one set depth. Unsurprisingly, all the grounds managers complained that their surfaces were poor and difficult to manage, particularly through the winter months."


He said he has no doubt that the tour has raised awareness of the results that can be achieved through the adoption of good working practices and by the use of specialist machinery in sports pitch renovations.

"The tour was a significant investment for us in time, materials and manpower but we feel it's important that others have the opportunity to learn about the exceptionally high standard of renovation work carried out in the UK. Visitors to all the events were as eager to learn about the process as we were to share our knowledge. At most of the venues, regular mechanical maintenance of the turf was lacking. Hopefully from the work that has been carried out, this can be reversed and we should start to see some better surfaces at professional levels."