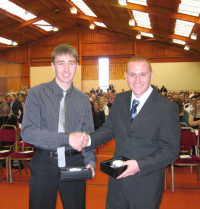 The eight best student greenkeepers of the year have been named at an awards ceremony at Oatridge College in West Lothian.

A total of almost 260 students received certificates from Mary Mulligan, the Labour MSP for Linlithgow, who also presented prizes to the top 40. After the ceremony she revealed that she is seeking urgent talks with the Scottish Funding Council to demand the completion of a review of the way it provides cash support to the specialist colleges - like Oatridge - which educate and train workers to meet the worsening skills shortage in vital rural industries. She had heard that the College has struggled for six years because funding has not matched the number of students it has recruited. The review of the funding mechanism was promised two years ago, but was put on hold this year.

Principal David James told the audience of students, families and friends that despite the need for 22,000 new workers in the landbased sector by 2017, there has been no funding for growth. Oatridge, he said, had exceeded student targets year-on-year and had the Funding Council matched student numbers, the College should have received an additional £2 million. The situation was made worse by a "disappointing" settlement for the academic year starting in September and the fact that none of Scotland's Countryside Colleges has been awarded European Funding Support for 2008/2009.

Mr James said: "This unfortunately has led to Oatridge having to review its financial forecasts and reduce expenditure accordingly. It has been a difficult time for all staff, especially those affected by the changes

"Had we been fully funded over the past four years it would have enabled the Board to further improve resources for our learners and reward accordingly the most important asset of any organisation: its staff.

Mrs Mulligan said: "Clearly there is a need for the skills are being provided at this College and I think it's very important that those who hold the purse strings recognise they need to fund the skills that need to be delivered.

"I'll be making representations to the Funding Council for them to review how they provide funding to Colleges like Oatridge, which have both a local and a national aspect and are also providing the kind of skills needed within the jobs market. I cannot understand why they wouldn't want to fund these types of courses and if there are present shortfalls, I think they need to be redressed."

Only 38 percent of Oatridge students come from the local Edinburgh and Lothians area with the remainder coming from all over Scotland and beyond. Research shows that up to 94 percent - far above the sector average of 76 percent- go straight into jobs or continue their education. The College receives about 50 percent of its funding from the Scottish Government, through the Scottish Funding Council.

Oatridge recently received a glowing report from HM Inspectorate of Education, which identified five projects described as "sector leading and innovative practice", but at least one of these projects is facing closure, said Mr James.

The need for 22,000 workers by 2017 for rural sector industries was highlighted in a recent labour market projection from Futureskills Scotland and Lantra, the sector skills council, recently reported recruitment difficulties in all 17 industries it serves.

David James added: The industries we represent are facing significant change with the labour supply unable to meet the needs of the industry, but there is also the need for the College to support Scotland's fragile rural economy. "The students who have just graduated here are those who in the future will have a significant impact on the rural economy of Scotland."

For more information or to arrange an interview with David James, Principal of Oatridge College, please contact Colin Adams Media and PR, telephones 01324 825383 or 07949 861565 or email colinadams@blueyonder.co.uk