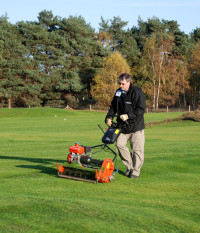 Norman Fenwick, the highly respected course manager at Ipswich Golf Club for the past 13 years, died last Sunday after falling ill whilst out cycling with his 14-year-old son Jacob.

A keen supporter of Sunderland Football Club, he was educated in Durham and joined Seaham Golf Club in 1972. He moved to Reading Golf Club in 1976 as an assistant, before taking up the position of head greenkeeper at Calcot Park in 1981 and, in 1986, joined Sandford Springs Golf Club in Hampshire.

His work at Purdis Heath was outstanding, both so far as the quality of the golf course was concerned but also his enthusiasm for conservation which is so important. Ipswich Golf Club secured its second BIGGA golf environmental award three years after Norman's arrival in Suffolk.

Neill Ellice, general manager at Ipswich Golf Club, said: "We have been very fortunate to have benefitted from Norman's passion, skills and knowledge. It has been a privilege to work with such a competent Course Manager during the 12 years I have been in my job.

"One of Norman's great qualities was that, despite having led the team that has produced one of the finest courses in the East of England, he was never satisfied with its progress. He was always looking for ways to improve the course and its environment yet further. An example of this will be the opening of the new short game area this month which was the club's latest project."

"To be able to rely upon such an able individual to run the greenkeeping side of the operation has been a luxury for me. Norman developed a great affection for the Purdis Heath site and its long term potential from both golfing and environmental perspectives.

"He was also determined to develop the next generation of greenkeepers by giving his team ample opportunities to undertake training and educational courses to develop their own careers. His enthusiastic leadership inspired his team members to take up the challenge of improving their skills and knowledge, leaving us in a strong position to deal with the aftermath of his tragic and untimely death."

David Withers president of Jacobsen added,
"Norman was indeed a great friend to our business. Being a near neighbour he was involved in the development of the RJ National, our three-hole golf course, almost from day one. We always intended for it to be a development step for young, aspiring greenkeepers and, with Norman's help and guidance, it far exceeded our expectations. He had a great way of imparting knowledge to our young greenkeepers. He respected their knowledge and their enthusiasm and would discuss options with them, before letting them make the final decision on the route to take. He was always available, either in person or by phone, to offer guidance and advice, and his feedback when testing new equipment for us was often forthright, as befitted a son of Durham.

"It was a privilege to have known Norman and, on behalf of Ransomes Jacobsen, we send our sincere sympathy to his family."