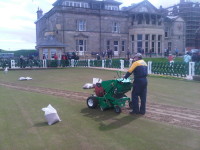 Gordon McKie, course manager of the Old Course, says that the small putting green by the course's first tee is subject to heavy traffic, and high levels of wear and tear. As a result, it was dominated by Poa annua and unable to sustain fescue coverage.

"The affected green is subject to heavy traffic and Poa annua ingression," Gordon explains. "It's part of the practice area and only five yards from the first tee, so we get a lot of people standing on it due to its location. We have sown pure fescue in the past, but the young sward can't cope with the traffic.

"That's why this year we decided to try to alleviate the problems and achieve a better surface by incorporating bent grasses. We overseeded in two passes with the Graden using the BAR All Bent and kiln-dried sand. We had a very successful take and it's done really well. It's something we will certainly consider next year in order to strengthen the sward on that particular green."

Although a traditional fescue course, Gordon says he is happy to incorporate bents in order to achieve a usable and hard-wearing playing surface. "With the bents in there, it's still a great surface to have," he adds. "We only closed the area for three weeks while the seed established, and have since opened it up and had above average play on it for the time of year. But in previous years, we had to stop play and close it off completely during the main playing season to allow the fescue to grow naturally to get that kind of result."