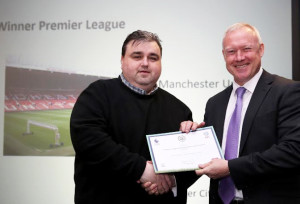 Manchester United registered a win on home soil ahead of Sunday's clash with Swansea City, without even kicking a ball.

That's because the club have been announced as the winners of the Premier League Grounds Team of the Season for 2016/17.

The prestigious award recognises the sterling work the groundstaff have done to keep the hallowed Old Trafford turf in perfect condition for every home game this term.

The decision was made by the Playing Surfaces Committee.

Ed Woodward, executive vice-chairman of Manchester United, said: "With 30 games of football and one Rugby League match at Old Trafford already this season, no other top flight club has had the same tight turnaround as our groundstaff.

"Late nights, early mornings and demanding shifts often go unnoticed, but the dedication and commitment shown by the team is something that everybody at the club should be proud of. I know the hard work really is appreciated by the manager and the players.

"I congratulate head groundsman Tony Sinclair and his team for their dedicated work in this well-earned award."