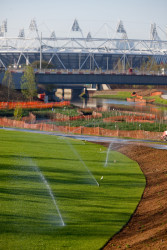 The images show that work is well underway to create around 250 acres of new parklands, on former industrial land, that will provide a colourful and festival atmosphere for the London 2012 Games and afterwards become the largest new urban park in the UK for over a century.

Over 1500 trees have been planted along with thousands of wetlands plants and the wetland bowl in the north of the park is complete with 15,000 square metres of riverside spectator lawns, timber seating, frog ponds, loggeries, wetlands, woodlands and tree-lined footpaths.

ODA Chief Executive Denis Hone said: "The Olympic Park parklands are in blossom and on track to be great new open space during the Games and in legacy. The riverside lawns, meadows, wooded hills and wetlands will help create a colourful festival atmosphere in London 2012 and become an important part of the regeneration of this part of east London after the Games."

ODA Project Sponsor for Parklands and Public Realm John Hopkins said: "The results of all the hard work that our landscape designers, contractors and suppliers have done over the last few years can now be seen as the park turns from brown to green, with the flowering meadows, plants and trees providing year round interest for people and wildlife."

The Cherry trees were grown in Hampshire and the wetland plants were grown in Norfolk before being planted in the Olympic Park, the turf was grown in Lincolnshire.

Further features of the Olympic Park parklands during and after the Games:

• 4,000 new 4-7 metre semi-mature trees, with over 1500 trees grown in Hampshire already planted including Wild and Bird Cherry, Ash, , Hazel, White Willow, Crack Willow, Alder, Aspen, Holm Oak, English Oak, Rowan, Lime, field Maple, Sweet Gum and Silver Birch. Seventy Cherry trees have been planted as have 8m high London Planes and young Black Poplar trees grown from cuttings taken from the site before construction began. The trees will provide shelter from wind and sunshine across the Park. Willow, Poplar and Alder are being planted in river areas to withstand flooding and species vulnerable to climate change have been avoided.

• More than ten football fields worth of nectar-rich annual and perennial meadows designed and sown to flower during the Olympic and Paralympic Games.

• Wetland bowls and rare wet woodlands in the north of the Park create habitat and help manage floodwater, protecting new housing and venues and 5,000 existing properties from a 1:100 year storm.

• Thousands of the 300,000 wetland plants, grown in Norfolk and Wales, have already been planted as part of the UK's largest ever urban river and wetland planting. Over 30 species of native reeds, rushes, grasses, sedges, wet wildflowers and irises have been grown initially on the Gower peninsular in Wales, with around a third grown from cuttings and seeds collected from the Olympic Park before construction started. The plants have been grown-on in coir mats sunk in waterbeds in Thetford and are now being transported and planted on the Olympic Park riverbanks.

• The riverside London 2012 Garden which will stretch for half a mile between the Aquatics Centre and Olympic Stadium on land that has been cleaned and cleared of railway sidings, contamination and Japanese Knotweed. The garden is taking shape and will celebrate centuries of British passion for gardens and collecting plants, with picnic lawns, timber seating and 120,000 plants from 250 different species across the world arranged into four temperate regions: Europe, Americas, Asia and the Southern Hemisphere.

• Feature planting designed by the Klassnik Corporation, We Made That and Riitta Ikonen - an art collective based in the Host Boroughs - and the University of Sheffield to represent the industrial heritage of the Olympic Park site.

• 250 benches and more than 3,300 seats built into the parklands so that people are never more than 50m walk from a seat.

• The southern part of the Park will focus on retaining the Games spirit, with riverside gardens and areas for markets, events, cafes and bars in legacy.

• The northern area of the Park will use the latest green techniques to manage flood and rainwater while providing quieter public space and habitats for hundreds of existing and rare species from kingfishers to otters.

• A 6m-wide, one mile road cycle circuit built into the parklands around the Velodrome, with lighting for year round and evening use but low level UV values to protect bats. Also 6km of off-road mountain bike tracks and a network of cycle paths across the Park including National Cycle Network Route 1.

• A large oval lawn with an amphitheatre setting in the north of the Park suitable for games, picnics and other leisure activities.

• Four football fields (2.1 hectares) worth of secure and accessible allotments.

• 5km of restored and accessible previously neglected rivers, including the original Carpenters Lock restored in a riverside bowl in the centre of the Park, connecting the northern and southern areas.

• Mounds and hills across the Park for tumbling in summer and sledging in winter.

• Temporary tree-lined daffodil, bluebell, clover and primrose meadows that vary through the seasons created on the development land on the northern entrance to the Park that may not be developed for many years. Rather than traditional construction hoarding which would deter people from using the Park, this unique use of parklands also reduces long-term security costs.

• Hanging gardens' thirty feet above ground on the huge footbridge from Stratford City with meadows, lawns, shrubs and rows of trees welcoming people over the main walking entrance into the Park.

• A tree-lined 'park road' into the north of the Park modeled on The Mall and Birdcage Walk next to St James's and Hyde Park, with distinctively designed surfacing, lighting and bollards and traffic management so visitors feel like they are in the Park.

• Large concourse areas reduced in size in legacy and broken up with 'islands' of plants, trees and meadows.

• Parklands around the Aquatics Centre including planted hills with seating providing views across the river to the 2012 Gardens.

The construction of the venues and infrastructure of the London 2012 Games is funded by the National Lottery through the Olympic Lottery Distributor, The Department for Culture, Media and Sport, the Mayor of London and the London Development Agency.